Man City started with a 4-4-2 with Balotelli and Aguero replacing Dzeko and Tevez, the starting strikers in their crucial Champions League match midweek. David Silva also made the team alongside Samir Nasri, who Mancini highly rates but never regained his form at Arsenal. The visiting neighbours would open up a 6-point lead at the summit and with the majority of his team rested in midweek, Sir Alex had his reasons to be optimistic even though the in-form Anderson would be out for three weeks.

City’s domination continued but as Aguero’s heavy first touch let him down from Balotelli’s through ball, United shifted a gear up and a head-and-chest one-two between Ashley Young and Van Persie sent the English winger down the flank with ample of space before his square pass found Rooney just inside the box who then placed his shot into Hart’s bottom right corner.

Less often this season, United did not concede first.

Things went from bad to worse as City captain Kompany was forced off of an unknown injury just 20 minutes – 4 minutes after conceding – and was replaced by Kolo Toure, who was more preferred in right back this season and Lescott would sure be worrying about his future.

The tide had changed since the first goal and City found it difficult to keep possession, let alone create chances. Van Persie’s lobbed through ball found Young again but failing to get the ball down on his first touch meant the winger had no second chance as his international teammate Hart came out of his penalty box to clear the ball. Aguero, who was unexpectedly dull given the amount of rest he had has, managed to find his way out of five United defenders but his placed shot this time was comfortably held by De Gea.

United’s confidence grew with possession and they doubled their lead before the half hour mark. It was a more seemingly direct and simple but always effective goal as the Rafael overlapped Valencia to send a low cross into the 6 yard box for Rooney to drive the ball into the same corner. The Valencia-Rafael partnership on the right is blossoming into another successful one in United history.

Shortly after the restart, Evans could not shake off and Smalling came on for him whereas for City, their reason for substitution was more interesting.  Balotelli was arguably the best player for his team in the first half, seeing much of the ball and being more creative than Silva and Nasri, resembling to Rooney’s style but after he attempted and failed a backheel, Mancini was signalling Tevez to warm up. Italians are eccentric, aren’t they?

The temperamental substitution paid off in fact as Tevez totally reinvigorated his side and was looking even more threatening than his former team was in the first half. Rather than waiting to receive the ball like Super Mario, his constant movement and exchange of runs with Aguero proved more practical. The minute combination of the Argentines and David Silva was a nuisance to the United defence and the goal you felt was coming finally came when Yaya Toure slotted home into the same corner as Rooney’s brace after De Gea’s fantastic double save. The goal came just after Van Persie’s right foot curler hit the post and Ashley Young was wrongly judged offside for his tap-in.

City continued to pile on the pressure and Silva was again denied by De Gea, although unintentionally, as the playmaker’s close range shot hit De Gea’s shoulder to clip the woodwork for a corner. With less than 10 minutes to go, Mancini summoned his super-sub from the bench hoping to scramble an equaliser to say the least. It was not from Dzeko but the equaliser did come when Zabaleta unleashed a fierce low drive after United headed clear Tevez’s corner. 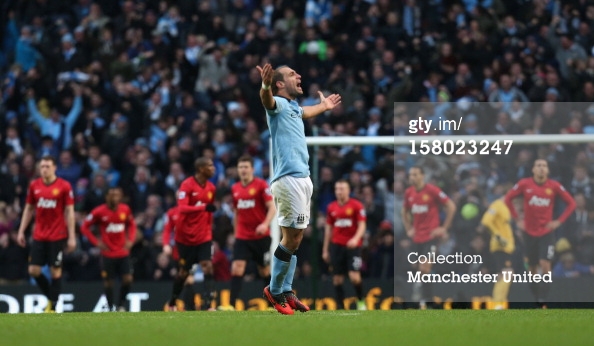 Zabaleta after his equaliser pass the Wall of United defenders

It was Tevez again however in the first minute of injury time when he fouled Rafael in a position where a left-footed free kick taker could hardly ask for better. Rooney, who was on a hat trick, gave way to a determined Van Persie and his shot to the far post, helped by a wicked deflection from former Arsenal teammates Nasri, went pass a fully stretched Joe Hart to not only give United their 6-point lead up the top but as well halted Man City’s unbeaten run at the Etihad. 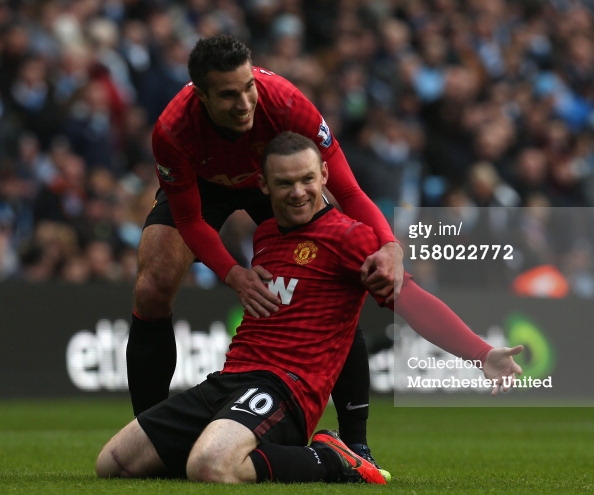 City will only have themselves to blame though as the two goals from Rooney were far too easily conceded. The marking was disastrous with 3 defenders failing to even get close to the striker in his first goal and was nowhere near him again when he scored the second. Summer signing Nastasic was quickly given a place in the starting lineup although he always looked more convincing in European matches than in the Premier League. Clichy on the other hand was equally disappointing as his offence today was better than his defence.

For Sir Alex, it should still be concerning as his side gave away two goals, in which both were from City players arriving late in or outside the box for the loose ball. They have never really found any replacements for Roy Keane nor Nicky Butt since they both left and although the Red Devils have achieved much success still in their absence, that’s where they could do better, especially if they would want to curb their recent habit of conceding first. While Mancini continues to overlook Javi Garcia just like he did with Nigel De Jong last season, United fans would no doubt be wishing they have either one.