No penalties in Italy vs France 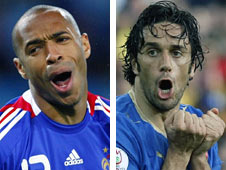 UEFA have clarified the uncertainty surrounding the match between Italy and France. Should Romania win and the other game (Italy vs France) finish in a draw, it was suggested that a penalty shootout would be necessary to determine 3rd and 4th place in Group C. However, UEFA have stated that such thing will not happen, as the rule states that penalties can only be used in the case where a qualification place is up for grabs.

Italy-France: Probable Line-ups
What could possibly happen in Group C?