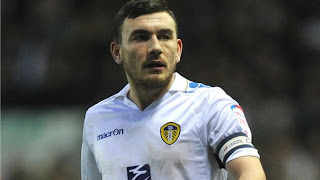 Leeds United Captain Robert Snodgrass has completed a move to the Premier League with Norwich City.

The fee is believed to be in the region of £3million, with £1.5m being paid upfront.

Snodgrass quit United’s pre-season training camp in Cornwall this week to enter discussions with the Canaries regarding a contract, now confirmed as a 3 year deal as of Thursday evening.

Since arriving in Yorkshire in 2008 from Scottish First Division side Livingston, he has served the Elland Road club diligently over the last 4 years, scoring 41 goals in 191 games for the Whites, including an International berth with Scotland during this time.

He was appointed club captain on February 25th for manager Neil Warnock’s first game in charge.

Snodgrass enjoyed a fruitful second half of the season, attaining 13 league goals, and 14 assists – the second highest amount of assists in The Championship during the 2011/12 season.

“He is a player I have admired for a number of years now and he’s at a good age at 24,”

He continued, “He’s also got that international experience with Scotland and is used to playing in big matches both with his country and at Elland Road.”

Snodgrass is not the first Leeds United player to make the switch south to Norwich in recent times.

Former Leeds club captain Jonny Howson transferred to the Canaries in the January transfer window, following the departure of midfielder Bradley Johnson out the door the previous July having failed to agree a new contract.

In contrast to his opposite number, Leeds United manger Neil Warnock, has expressed his natural disappointment of losing a key player in his squad.

“I can honestly say that in all my time in football, I’ve never worked as hard in trying to keep a player. He was offered the best contract, the captaincy, and we would of built a team around him so I am very disappointed”

“He’s made it clear what he wants to do and he’s had his head turned. He wants to play in the Premier League.”

Chelsea: A Moment Of Worry For Di Matteo
Manchester City’s Vincent: You would love to be in his Kompany