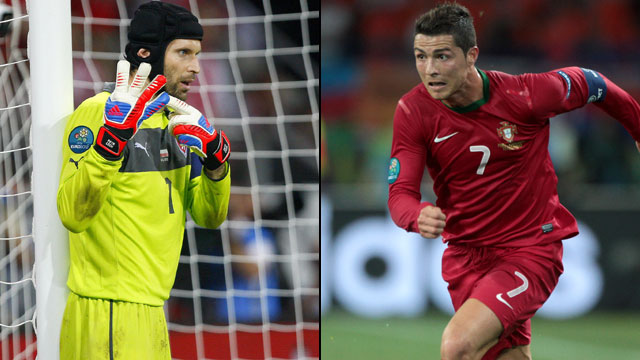 The knockout stages of Euro 2012 get underway on Thursday, with Portugal and the Czech Republic the two teams to be given the first chance to book a place in the semi-finals. Paulo Bento’s team are strong favourites to progress, but having won their group against all odds the Czech Republic should not be underestimated.

Paulo Bento’s men face a tough challenge in the form of the Narodak however the Selecção are confident their form will guide them to the final four where a game against Spain could await.

‘The team which will score more goals wins the game’ is the perfect saying to sum up the game as both sides offer strong attacking waves making the outcome difficult to call. The quarter-final is sure to provide an interesting spectacle, with both teams revelling in a mini-renaissance after losing their opening games of the tournament.

When talking about attacking games between the two countries, one needs to deep dive into history books and land upon the ordinate pages of Euro 96′.

Portugal, with the likes of Luis Figo, Ruis Costa and Joao Pinto in attack had a fantastic tournament, till they lined up against the Czechs. This game was no different, the Selecção dominated the game from start to finish, but failed to break the deadlock, thanks to some resilient defending from the Czechs.

Former Manchester United man, Karel Poborksy would then break Portuguese hearts by delightfully chipping over Portugal keeper Vitor Baia and thereby ending the dream journey for the Portuguese. That team was full of attacking players but missed the finishing touches of a ‘C Ronaldo’ that this generation can boast of. It remains to be seen if the Portuguese outfit find it easy this time around or history repeats itself.

The Czech Republic tend to set up in a very similar way to Portugal, with a lone striker flanked by two advanced wingers. The only difference is that they like to play with an attacking midfielder sitting just behind this front line, occupying a more advanced position that any of Portugal’s midfield three.

Portugal have hit form at the perfect time despite alarming pre-tournament form which saw them fail to win four matches, scoring only once. Though evidently inspired by captain Cristiano Ronaldo, Paulo Bento’s men increasingly looked a real team unit as they emerged from the ‘Group of Death’ behind Germany. Despite going behind against the Dutch in their most recent game, Their 2-1 win rarely looked in doubt, with top-class performances all over the park. Counter-attacking penetration came from both wings, and through the centre of midfield.

If Portugal’s midfield can repeat the trick from Sunday and ship the ball out to Ronaldo and Nani as quickly as possible then the two wingers could well wreak havoc, especially if they can hit the same heights as they did at the weekend. They also shouldn’t be scared of shooting from range when the opportunity presents itself, since Petr Cech can be susceptible to the sort of swerving shots that Ronaldo and Nani have turned into an art form.

The only man from either camp involved in the 1996 encounter is Vladimir Smicer, now the Czechs’ ‘sports manager’ – Michal Bilek’s assistant in layman’s terms. The ex-Liverpool man, in the job since 2009, has helped Bilek sift through 32 players in order to find the 23-man squad that has taken their country to a first quarter-final in eight years.

It’s perhaps not a vintage Czech side – yet. This squad boasts nine players aged 26 or under as the country looks not only to the present but also to the future. Smicer had a hand in discovering midfield duo Petr Jiracek and Vaclav Pilar – who, despite possessing fewer than 20 caps between them, have shone at this championship with two goals apiece. The Czechs surprisingly lost their first qualifying match to Lithuania and were humbled in their Euro 2012 opener against Russia, but on both occasions recovered, showing resilience, character and togetherness. If Bilek, and in particular Smicer, can instill some of that 1996 spirit into this current Czech side then their journey might just continue.

The most productive area of the Czech Republic outfit has been the wings in this tournament with Jirasev and Pilar, both capable of assisting as well as scoring goals. The Portuguese will have to watch out for the marauding runs of these wingers and make sure crosses aren’t delivered with considerable ease. The attacking threat on the wings doesn’t end there; Full Backs Limbersky and Selassie run down the wings quite often and are capable of providing moments of brilliance.

At the top of the park, the Czechs will, as usual, operate with a solo striker with advanced wingers, exactly the way Portugal line up, cancelling each other in strategy. Milan Baros, a former Golden Boot winner, will take up that all-important berth at the top of the field.

All four of the Czech Republic’s goals so far have come from their wingers, with Petr Jirasek and Vaclav Pilar grabbing two each. Both players have pace and look to cut inside towards goal, so it will be vital that the likes of Raul Meireles and João Moutinho double up and do not leave Fábio Coentrão and João Pereira too isolated.

Portugal have a full-strength squad at their disposal for the game against the Narodak. Duo Bruno Alves and Raul Meireles both appear to have overcome the knocks picked up against the Dutch. Helder Postiga will be supported up front by Nani and Cristiano Ronaldo, with Raul Meireles, Miguel Veloso and Joao Moutinho forming a triple pivot in midfield.

Michal Bilek’s biggest worry ahead of the quarter-final clash with Portugal is the fitness of star midfielder Tomas Rosicky, who is rated doubtful for the game on Thursday following his Achilles tendon injury sustained in the game against Greece. Should the Arsenal star fail to recover in time for the clash with Paulo Bento’s men, Viktoria Plzen’s Daniel Kolar will continue to deputise. Up front, Milan Baros is set to spearhead the Czech Republic attack.