Rory Delap started his footballing career with Carlisle United before being snapped up by Derby County in 1998. It was at Pride Park that Delap made a name for himself, as he endured four Premier League seasons with the Rams, mustering up 113 appearances in all competitions. Delap’s game attracted interest from different Premier League teams, but in the summer of 2001, he transferred to Southampton for a club record fee of £4 million.
During his five years at St Marys, Delap accumulated 151 appearances and continued to make a name for himself. It was when Southampton got relegated from the Premier League, that signalled the end of his career with the Saints, and he quickly transferred to Premier League side Sunderland.
With Sunderland, Delap only made thirteen appearances in the one and a half seasons spent with the club and coupled with the Black Cats’ relegation to the Championship, ended a disappointing season for Delap.
Delap eventually moved to fellow Championship team Stoke City on loan, with the Potters’ manager Tony Pulis soon signing the Sunderland player on a permanent basis. Delap’s first full season saw the club claim second place in the league and confirm Stoke City’s promotion to the Premier league.

Stoke City’s first ever Premier League saw Delap emerge as a fan favourite and a key player to the Potters’ success. In the 2008/2009 season, the first thirteen goals that Stoke scored in the league, seven were credited as assists by Rory Delap. Delap’s performances and assists were so impressive,  manager Tony Pulis stated that Delap’s absence was possibly the key to their 2-0 defeat to Chelsea. With the season over, Delap made 36 appearances for the Potters as they secured another season in the Premier League.
The 2009/2010 season started and Delap made an instant impact by assisting the second goal in Stoke’s 2-0 opening game victory against newcomers Burnley.
However, Delap’s season hasn’t been up to the standards of his previous season. Within three games, Delap committed two fouls which led to two penalties being given to the opposition. Luckily for Delap, Stoke goalkeeper Thomas Sorensen saved both. In addition to these fouls, the 33 year old was heavily criticised for his role in failing to defend the free kick from which Maynor Figueroa scored a ‘halfway line’ free kick.
With criticisms aside, Delap made his 100th Stoke City appearance by coming as a sub against Aston Villa.

Delaps importance to Stoke City is due to his good performances, but more importantly “The Delap Special”. This is what made Delap a popular figure at the Britannia Stadium and in the Premier League. The Delap Special consists of a long throw that has assisted Stoke, numerous amounts of time. Of the seven goals that Delap assisted in their first thirteen goals in their first Premier League season, all of them were these long throws that cause opposition defenses a nightmare.
Delap’s long throwing ability has been compared to corners and free kicks by pundits, whereas managers have commented on it, including David Moyes saying Delap was like a ‘human sling’.
Many of Stoke City’s goals have been assisted by Delaps long throws particularly in the 2008/2009 season where he assisted goals against seven different teams including Arsenal where his long throws aided them to a 2-1 victory over the Gunners. One of these goals was recorded at a 45 metre throw from the sideline to the penalty area.
So far this season, Delap has assisted four goals for the Potters by using the Delap Special.

Delap ready to unleash one of his tremendous long throws. 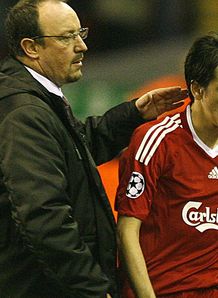