This would be the reality; the dream come true for the whole of Manchester, since the support for the Reds will be flying in from far-flung places such as Malaysia and Singapore. The city would be awash with blue, the streets adorned with City flags, and the locals joyously singing ‘Blue Moon’. However, despite being a City fan for only 16 years, I know that things are never quite this easy for the Blues. My first game was a 2-1 defeat by Barnsley at the old Maine Road, with City’s goal scored by the now reformed alcoholic- turned-artist, Jim Whitley. Yes, we have been promoted a few times, but nothing has changed really, except for the players’ names. 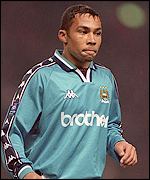 City fans worldwide will claim that now, due to our newfound wealth, we should be beating sides like United and that we should be top of the table this season, and win the Champions league the next. However, this City fan is more circumspect. It will take time for Mark Hughes to build a side capable of sustaining a challenge to break into the upper reaches of the Premier League. Teams do not gel immediately, and the big-name signings will not happen in the January transfer window. It has taken Aston Villa, and their boss Martin O’Neill a full 3 years and a vast amount of money to be ready to challenge the ‘top four’. City have only spent money on one player, Robinho, since the Abu Dhabi United Group bought the club, and can not expect to consistently compete with sides like Chelsea and United, yet.

Anyway, back to this game, and boss Mark Hughes, a former United player himself, will have to make a number of key decisions regarding his personnel. Brazilian star Robinho should be available again after an injury forced him out of the splendid victory away to Schalke in the UEFA Cup, and will take the place of young striker Danny Sturridge, who played a key role in the victory, setting up the first goal for Benjani. Personally, I would play both Sturridge and Robinho, whilst dropping Darius Vassell, but Hughes seems to like the pace and work-rate given by Vassell, so unfortunately, Sturridge will miss out. Argentinean right-back Pablo Zabaleta will also return after a minor thiggh strain meant he missed the trip to Germany. In all likelihood, he will replace Micah Richards at right back, with the England international moving into the centre of defence alonside captain Ricahrd Dunne, with Belgian Vincent Kompany returning to his more defensive midfield position. Israel intenational Tal Ben-Haim will be the reserve defender on the bench, possibly along with Brazilian international Glauber Berti, who is picking up a year’s wages without playing a game! Another Brazilian, midfielder Elano, is available for selection after the birth of his child meant that he remained in England on Thursday and missed the Schalke game. He is likely to stay on the bench, however, as Hughes continues to favour the 4-3-3 formation that has served us well in recent matches. At left-back, Spaniard Javier Garrido was removed at half-time against Schalke and replaced by Micahel Ball due to injury. Ball will continue to deputise for Garrido if the injury rules him out. Old Taggart Face (Ferguson) also has selection dilemnas, with full-back Gary Neville possibly available for selection, along with moody Bulgarian striker Dimitar Berbatov, who is expected to shake off a hamstring injury for the visitors.

Blues keeper Hart was outstanding on Thursday against Schalke, keeping (get the pun!!) City in the game with a number of fine saves. Van Der Sar is prone to the odd mistake, but will have to be at his best to stop the Blues. Both goalies’ are expected to have a lot to deal with, so it will be interesting to see who comes out of the game with their pride still intact: the young pretender or the experienced veteran.

Ronaldo is one of the best players in the world at the moment and has the ability to make his opposing defender look stupid, but Ball dealt with him well in the derby match at Old Trafford last season, and will be a key figure for the Blues if he plays. Vassell is clearly not one of City’s best footballers but he gives his all to the team, tracks back and works hard. He will be expected to limit Evra’s attacks and to cause the French left-back as much trouble as possible.

I may be being optimistic by wishing for a draw, but after two fantastic results against Arsenal and Schalke, the Blues’ confidence will be sky-high. United will look to impose themselves early on, so if City can withstand this storm, then anything is possible.

I predict Robinho and Stephen Ireland to score for City, with Ronaldo and Wayne Rooney replying for the Reds. Zabaleta and Vidic to get sent off in a fiesty affair.