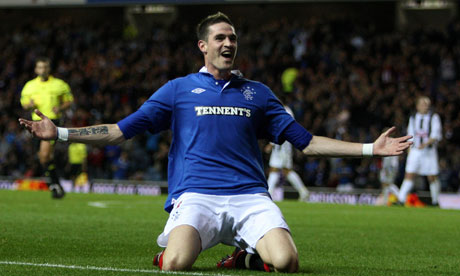 Lafferty nets a hat-trick for Rangers in League Cup

Cup holders Rangers breezed into the next round of the Co-Operative Insurance Cup after a fine 7-2 victory over First Division Dunfermline.

The SPL Champions made 7 changes to the side who beat Dundee United 4-0 on Saturday with Neil Alexander, Andrew Little, Kirk Broadfoot, Andy Webster, Steven Naismith, Kyle Hutton and Kyle Lafferty coming into the starting line-up. But it was £4m signing Nikica Jelavic who opened the scoring for Rangers after 21 minutes when the Croatian International poked the ball past Chris Smith from Broadfoot’s cross.

The First Division side got a goal back just before half-time when Calum Woods was not picked up at the back post and nodded in to make it 3-1. Dunfermline’s travelling support were in raptures just after half-time when Gibson produced an excellent cross from the right and Cardle headed past Alexander.

But the dream of a comeback lasted one minute when Kyle Lafferty got his second of the evening when substitute Steven Naismith set up the striker to cooly slot into the net. Young midfielder Kyle Hutton was the most impressive man on the park last night with an excellent passing range and immaculate in his passing accuracy.

The goal of the night came from Nikica Jelavic on 59 minutes when Little passed the ball into Jelavic and the powerful striker acrobatically produced a stunning overhead kick into the top corner.

Kyle Lafferty netted his hat-trick on 71 minutes for Rangers, his first for the club since joining in 2008. Steven Naismith got the other with a looping header which ended a great night for Rangers in the League Cup and send them into the next round.

Crucial period for the Champions
Challenging trip to Aberdeen awaits