Rangers in yet another donation to troops 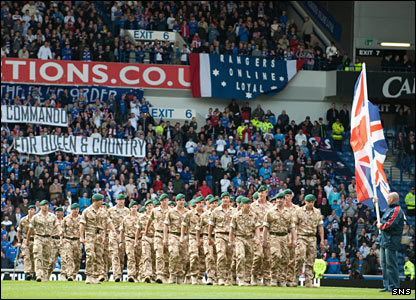 TO celebrate the First Anniversary of ‘Tickets For Troops’, Rangers has donated 365 tickets to the Armed Forces for Wednesday’s match against Hibs.

Each of the 365 donated tickets marks one day of the campaign over the last year and is part of the Club’s continued support for Armed Forces personnel and related charities.

The match is the night before Armistice Day and it is expected that the full donation of tickets will be used by troops and their families.

Martin Bain, Chief Executive of Rangers Football Club, said: “Tickets For Troops is a fantastic initiative that, in a very practical way, enables troops to make the most of their time back home in the UK.

“There are Rangers fans serving throughout the Armed Forces and we are delighted to welcome some of them and their families to Ibrox on Wednesday night. This football club is totally committed to supporting all our troops who deserve enormous admiration and respect.”

Rangers is also holding its own Remembrance commemorations at Ibrox on Saturday 13th November, where more than 100 Royal Navy personnel will be honoured on the pitch at half time in its match against Aberdeen.

In the last year, Rangers has donated around 3000 tickets to members of the Armed Forces through its own initiatives as well as Tickets For Troops and, in June, The Rangers Supporters Assembly launched its True Colours initiative, where fans buy season tickets to donate to serving personnel.

Lord Marland, Chairman of Tickets For Troops said: “We are extremely grateful to Rangers FC for supporting the troops and their families in this way. Tickets for troops is beginning to make a real difference to the lives of our Armed Forces and I want to thank all the organisations who have supported Tickets For Troops over the past year”.

Since Tickets For Troops was launched last year over 70,000 troops have signed up and over 250,000 tickets have been generously donated by sporting organisations, musical venues, acts and theatres.

Gers ready for Mestalla battle
Rangers back to winning ways