We Are Rangers, Super Rangers! 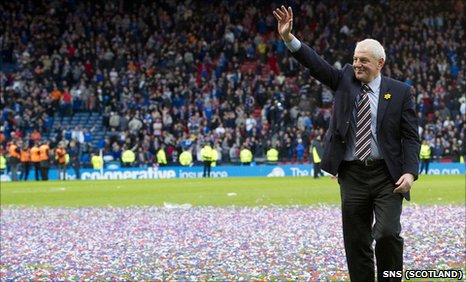 Yesterday’s Co-operative Insurance Cup Final win over our arch-rivals Celtic felt so sweet.  We were written off before the game and they were bulging with over-confidence.  We attacked Celtic on the pitch and stood up to them in the stands, outsinging them from start to finish.

The Rangers end at Hampden Park was absolutely rocking.  The Rangers support sang as one, celebrated as one.  The atmosphere from the west of the stadium definitely helped Rangers gain an edge over Celtic.

But of course the game is won on the park and we did it well.  Walter Smith picked an attacking-looking 4-5-1 which most of the time was actually a 4-4-3.  Maybe he has finally realised that sitting back does not work, and when we attack Celtic we expose their defence for what it really is.  We restricted Kris Commons and Emilio Izaguirre to few opportunities on the flanks but perhaps tellingly of their ability when we didn’t restrict them, Commons crossed for a Brown header chance and Izaguirre crossed for Ledley’s goal.

Steven Davis was by far the best player on the park.  In my view that was the best the Ulsterman has played for several months, in fact you could probably stretch back to last season to find a game where he played so well.  He was the first to every ball, his passing was immaculate and he had the determination to drive at the Celtic defence, an example of that being the goal he scored on 23 minutes.

Once again, young Gregg Wylde showed real pace and flair and an attacking mindset lacking from Smith’s team selections in recent games against Celtic.  I could not believe the amount of corners whipped in by the left-footed player that were in a dangerous area but were not converted into even a chance. Nikica Jelavic had a bit of a rollercoaster of a performance.  At times he lead the line superbly and threatened the Celtic defence, but in others he lacked a real cutting edge and fluffed a few shots.  He didn’t half make up for it by scoring the winner though!  He was unlucky when one-on-one with Charlie Mulgrew, and after being fouled, many were surprised it was only yellow for the ex-Aberdeen defender.

A special mention for our 40-year-old captain, Davie Weir.  He should be given a knighthood for his performances and how he is still able to play football at a high level when most retire five or six years earlier.  He read the game perfectly and made a few crucial interceptions.  It was fitting to see Weir lift the trophy at the end of a thrilling game.

We deserved the victory yesterday and should have killed off Celtic in a 20-minute spell at the start of the second half.  The game showed we are capable of attacking and attacking well, and it could give us a psychological advantage in the title run-in as Walter Smith looks to lift his last league title with Rangers.