I’m sure you have heard about the money problems facing Rangers, but that’s only their off field worries. After a ridiculous display in the Scottish Cup, Rangers only trophy hope this season is in the league, but with Celtic on form and lets just say Rangers not, it is clear that they need another striking option. With the recent departure of Nikica Jelevic, and injuries to both Kyle Lafferty and Steven Naismith, Rangers were left with only one striker David Healy. Healy has taken a lot of stick from not only Rangers fans this season, he has not performed anywhere near the standard of a Rangers striker. 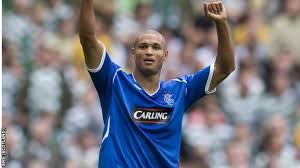 The only thing is, they have no money. They can only buy players on loan or on a free transfer, now I know some teams would be desperate when their playing awful and their rivals are running away with the league, but when I read the article written by Mark Hateley, to say the word bemused is an under statement. In the article Mark tells us his thoughts on the possibility of Rangers re-signing their former striker Daniel Cousin, the name ringed a bell but as I read on I didn’t remember this player being as good as Hateley described, and in fact he wasn’t.

Mark said Daniel is “A player who can deliver when it matters.” but after doing some research I found that Daniel is most definitely not. If Mark meant by Cousin’s goal scoring ability then Daniel has only scored 103 goals out of a whopping 406 games! This shocked me but there was far more to come. Hateley also said: “This is a guy who has scored at The Emirates and Old Trafford, whilst at Hull City” Again after some searching I found that in fact Daniel did score at The Emirates and against Manchester United , but these were only 2 out of his 4 goals for Hull in 30 matches, what a striker this man is! Still Mark rambled on ; ” Daniel possesses the ability to be tearing up places like East End Park and he can run riot at the teams in the bottom half of the table” There was no surprise that once again I found a fault in this statement, Remember Daniels scoring record? well put that together with the legs of a 35 year old and think about the results. At this stage I was laughing, but Mark then gave me a reason to laugh hysterically. Mark said: “Another positive is Cousin has not clocked up too many miles since leaving Ibrox in the summer of 2008.In the last four years he has only started 60 games for Hull and Cypriot side Larissa while most of the guys in the current Rangers squad are reaching those kind of totals every season.” Now wait, does Mark mean that if a player doesn’t play a lot of football (Like in four years) that it is a good thing? I’m sorry but 1. A player that doesn’t get a lot of game time will lack awareness, creativity, and in this man’s case goalscoring ability, And 2. Will most definitely lack match fitness.  These two points combined with Daniels goalscoring record and age = A Mistake.

If Daniel signs for Rangers, I honestly do wish him all the best. However in my opinion he wont be a success, and just now I can’t see the title going anywhere else than Parkhead.

Liverpool should keep faith in Andy Carroll
Newcastle United’s Cisse & Ba – Could This Be The Start Of a Great Toon Two?