A scintilating, sensational, stunning, stupendous and sublime performance from City enabled them to record a fully deserved win against Arsenal at the City of Manchester Stadium today. Goals from Stephen ‘Superman’ Ireland, Robinho and a penalty from young striker Danny Sturridge sealed the three points and capped an amazing performance from the Blues. 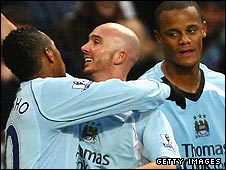 City manager Mark Hughes sprung a major surprise in his team selection with Joe Hart being passed fit to play only days after it was predicted that he would be out for between three and four weeks. The only change from the side that drew against Hull was the return of captain Richard Dunne in place of Israeli international Tal Ben-Haim.

Arsenal were missing at least six key players including Cesc Fabregas, Emanuel Adebayor, Kolo Touré, Theo Walcott, Bacary Sagna and William Gallas through a mixture of injury, suspension and being an idiot!!! Youngster Gavin Hoyte, brother of Middlesborough defender Justin, was given the thankless task of marking Brazilian star Robinho, and former Manchester United defender and light-bulb lookalike, Mikael Silvestre played against the club he came so close to signing for at the end of the transfer window.

City started brightly and were making the early running. However, any good move was brought to a swift conclusion by winger Darius Vassell. The former England international was hopeless in the first half, with misplaced pass after misplaced pass after misplaced pass!! The rest of the first half was generally an even affair, with both sides creating some chances, including a Samir Nasri free-kick which Joe Hart could only parry straight to Niklas Bentdner, whose backheel found Denilson who proceeded to smash the shot wide.

The deadline was broken in the final minute of the first half when a mix-up between Silvestre and Gael Clichy allowed Blues midfielder Stephen Ireland to nip in and lift a shot over the advancing Manuel Almunia to give City the lead at half-time. It was the Irish midfielder’s seventh goal of a fantastic season, in which he has arguably been City’s best player.

Arsenal were clearly given a rollocking during the break by Arsene Wenger and they came out of the blocks very quickly, fashioning out a couple of decent chances, notably when Hart saved from Bentdner in the six-yard box.

However, in the 56th minute, Robinho scored an utterly delightful second City goal to put the match beyond Arsenal’s reach. Shaun Wright-Phillips won the ball in midfield, galloped past a number of visiting players before threading a perfectly weighted ball through for Robinho to execute an exquisite chip over Almunia. It was the finsh of a man enjoying his football, and the celebrations included a hug with Elano, one of the substitues.

City pressed on, meaning that the game remained open and full of excitement. Robinho then had a goal disallowed for offside and saw his shot saved on the line by Johan Djourou after he rounded Almunia. Robin Van Persie also had a goal disallowed, this time for unsporting behaviour, after he nicked the ball away from Hart as the keeper tried to take a goal kick.

The final goal of the game came from the penalty spot after a clumsy challenge on the byline from Djourou on Danny Sturridge. The striker picked himself up, and calmly slotted the ball past Arsenal’s keeper. This third goal did not flatter City, who worked hard throughout the game and fully deserved the three points.

Hart – Didn’t have a great deal to do, but was there when needed – 6

Richards – Much better than in previous games. Marshalled Bentdner well – 8

Dunne – Back to his best after a poor run of form recently. Commanded the back-line superbly – 9

Garrido – Troubled at times by the trickery of Diaby, but generally did OK. Didn’t get forward as much as usual – 6

Kompany – Protected the defence fantastically. Was always in the right place at the right time – 8

Ireland – Another superb performance from the midfielder. Was end-to-end all game and scored crucial first goal – 9

Wright-Phillips – Out of position in central midfield, but coped well. Made second goal for Robinho – 7

Vassell – Oh Dear!!! Tries his best but not good enough for this team. I’m considering changing my username – 3

Benjani – Lacklustre in the first-half, but much better after the break. Held the ball up well – 7

Elano – Was given a rapturous welcome when he came on, and played some neat, tidy passes – 7

Hamann – Brought on when solidity was needed and supplied it. Not enought time to influence the game – 6

Sturridge – Scored final goal from spot after being brought down. Not enough time for more of an impact – 7

Men of the Match: Richard Dunne and Stephen Ireland