Before the start of the match, United boss Sir Alex Ferguson had complained about the treatment being received by winger Cristiano Ronaldo. He claimed that teams in previous matches had specifically targeted Ronaldo and had tried to kick him out of the game. He wanted referees to be stronger and start to book all the players who committed these fouls. Well today, at the City of Manchester Stadium, never has a point been turned on its head as much as this. As displayed above, on countless occasions the United team brought down City winger Shaun Wright-Phillips as he attempted to attack for the Blues. Time after time, Wright-Phillips would use his pace, touch and low centre of gravity to squirm his way past United players, only to be purposely fouled by these opponents. The unfortunate City winger could barely stand on his own two feet at the end of the game, such was the punishment he received. It should be noted, however, that Wright-Phillips did not roll about on the floor and demand a free-kick every time he was fouled, as would have been the case if it was Ronaldo who had been on the receiving end.

City boss and former United striker Mark Hughes made one change to the side that had so comfortably beaten Schalke in the previous match, with Brazilian star Robinho recalled in place of Danny Sturridge. United manager Ferguson made five changes from the side that faced Villareal, including recalls for Edwin Van Der Sar and Serbian defender Nemanja Vidic.

United started much the stronger of the two sides, and dominated the early exchanges. Scouser Wayne Rooney saw his shot partially saved by Joe Hart in the city net, Bulgarian striker Dimitar Berbatov had his glancing header tipped round the post by the City ‘keeper, and French full-back Patrice Evra smashed an effort over the bar. The only attack the home side managed in the first-half culminated in a snap-shot by Irish midfielder Stephen Ireland grazing the outside of the post. United finally took a much-deserved lead in the 42nd minute, when Rooney pounced from three yards after Hart had saved from Michael Carrick.

Mark Hughes made two changes at half time, with Pablo Zabaleta, deemed fit enough only for the bench, and Elano replacing Didi Hamann and Darius Vassell. This was the perfect chance for Elano to show Hughes of his qualities after recently criticising the manager for being left out.

Then on 68 minutes, United’s Portuguese midfielder Ronaldo blatantly handled a Rooney corner after mistiming his jump, leaving referee Howard Webb with no choice put to send the winger off. Ronaldo’s sending off was warmly greeted by the home supporters, who started a chorus of ‘Cheerio’. 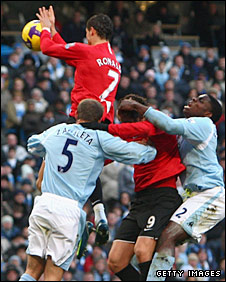 City now had a chance to level the game, but depsite seeing a vast majority of the ball, they were unable to break down a resolute United back-line. Richard Dunne saw his effort brilliantly cleared off the line by Evra and then, after a City corner was cleared in injury time, with ‘keeper Joe Hart upfield, Wayne Rooney ran half the length of the field and attempted a speculative 50 yard lob, only to see Hart sprinting back and somehow managing to claw the ball away under his goal.

Overall, City, in my opinion, didn’t deserve a point. They were completely outplayed in the first half and then lacked the imagination and creativity needed to force an equaliser.

Hart – Made a couple of decent saves, including one from Rooney’s lob at the end, and not at fault for the goal – 7

Richards – Handled Ronaldo well, but failed to get forward as much as he could have done – 6

Dunne – Solid at the back, and made a couple of timely tackles. Nearly scored at the end – 7

Garrido – One of City’s most improved players this season. Defended well and supplied width on the left – 7

Wright-Phillips – Best player for the home side by a country mile. Ran the midfield in the second-half, but was fouled every time he attacked – 8

Vassell – Not in the game first-half, and taken off – 5

Robinho – Another one who didn’t look fit. Unimpressive and need more from him in games like this – 5

Benjani – Failed to hold up the ball, and didn’t cause Ferdinand and Vidic too many problems – 5

Zabaleta – Imorved the balance of the team. Got stuck in and came forward well – 7

Elano – Saw lots of the ball in second-half, but passing was poor. Needs to improve – 6

Man of the Match: Shaun Wright-Phillips