Tony Pulis led Stoke City to a spiritual draw at home against Manchester City. The spirit has certainly extended to Manchester United camp. Since the 6-1 demolition by Mancini’s team in Old Trafford, Manchester United has not gained an upper hand in the Premier League title chase. A growing injury list and the demolishing confidence of young players have seen United lacking the brilliant attacking football they played early in the season.

They strived to stay in the race, though, through solid defence and a strong mentality. The 3-3 draw at Stamford Bridge and injury time winner versus Norwich did not just come through luck. The players’ previous success has further anchored their belief in riding over their city rival in May.

Knowing that a win would put them in the main driving seat in the title race — not only leading in points but also closes on the gap in goal difference, Alex Ferguson relied on Ferdinand, Carrick, Giggs and Rooney as the spine of the team against a slightly dipping Fulham side.

After two consecutive defeats, Martin Jol adapted a more sensible approach as a visiting side to Old Trafford. Manchester United won the majority of possession in the first 15 minutes when Fulham camped in its own half. John Arne Riise and Stephen Kelly halted threats from both flanks, and Schwarzer was seldom called upon for duty, apart from the weak efforts from Welbeck and Rafael.

Fulham flashed glimpses of positivity through Dempsey and Dembele’s build-up play. Dempsey right foot curling shot had even prompted a diving catch from De Gea, one of the more promising attack from both sides, but the midfield was never quick enough to support Pogrebnyak, whose physical strength was outnumbered by a solid defensive line led by Rio.
United players were patient, being confident that a goal would come sooner or later. A draw at half time would delight Fulham fans, but United did what they are best at — capitalising at opponents’ mistakes. Hangeland and Riise could not clear the second wave of attack from a Manchester United corner, and Evans cut back to Rooney, who had relieved the once-looking anxious Sir Alex and saved the team from a hair-dryer treatment at half time. 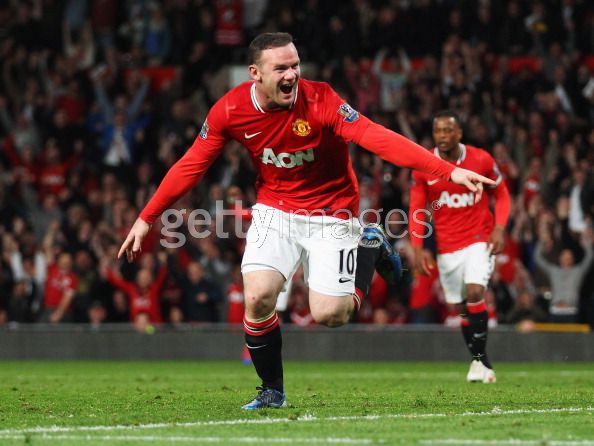 Wayne Rooney celebrates his 28th goal of the season

A more open 2nd half was anticipated by the fans. Fulham tried to get back to the game, but they needed Schwarzer to keep their hopes alive. The Australian stopped an early attempt from Valencia who was released by Giggs’ top-class lob pass. Ashley Young’s low drive towards the corner was palmed away, before Schwarzer produced the play of the match when he denied Ashley Young’s first time volley from a Valencia cross as well as the rebound.

Fulham still only needed one chance, and it’s getting more likely when Manchester United started looking careless. Carrick and Giggs’ handicap in pace was well-exposed, and Fergie didn’t make things better by taking Rio off. This is undoubtedly the decision to be challenged if the scoreline did not go Manchester United’s way.

The home fans were getting worried when Martin Jol decided to gamble by throwing in Bryan Ruiz and Danny Murphy. The defensive line without Rio looked increasingly incapable to cope with Fulham. When Murphy penetrated into the box, Manchester United relied on the 12th man, Mr Oliver the referee, to deny a penalty when Carrick’s challenge caught Murphy’s left foot.

For most of the match Manchester United was the better side, but the victory was indeed a hard-fought one. More importantly, they got the results they need and will look to extend their advantage with a kinder fixtures following up before they travel to the Etihad. Martin Jol would certainly sound positive in the post-match conference but will struggle to rebuild the momentum after notching three straight defeats.