Grade one referees in Scotland have voted for strike action which could see a host of postponements next weekend.

Since the debacle at Tannadice last month, the referees have came under excessive criticism from Celtic over this incident and other decisions that followed. 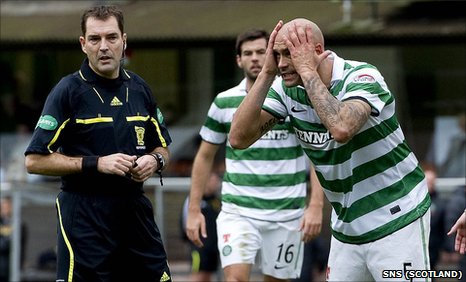 Referee Dougie McDonald has been under the spotlight in particular after over-turning his decision to give Celtic a penalty at Dundee United. McDonald initially thought United keeper Dusan Pernis had fouled Celtic striker Gary Hooper but after consultation with linesman Stephen Craven, the decision was changed. The decision proved to be correct, but in the aftermath of the incident a number of things were revealed including claims that McDonald and Dallas lied following Craven’s resignation. Celtic chairman John Reid has publicly called for Dougie McDonald to be sacked from his role.

In the Old Firm derby, Willie Collum gave a controversial penalty for Rangers to make it 3-1 after Kirk Broadfoot went down following minimal contact with Celtic defender Daniel Majstorovic. Celtic manager Neil Lennon put heavy criticism on Collum and then Lennon was sent to the stands at Tynecastle following Joe Ledley’s red card.

Even Celtic striker Gary Hooper got in on the act by claiming that referees want to give decisions against Celtic.

The decision to take strike action was reached at a referees’ union meeting held on Sunday afternoon. There are six Scottish Premier League games scheduled for next weekend and there is also a full card in the Scottish Football League. The SPL games would definitely be directly effected and some of the First Divison matches would likely be postponed also.