Since a stunning performance at the 2002 World Cup, which they co hosted, South Korea have struggled to replicate the form that saw them reach the semi finals of the tournament. During 2006, they managed to secure an impressive draw with France but ultimately went out during the group stage. The team comfortably qualified for the 2010 tournament but it remains to be seen if they can perform outside of Asia.

The team have been drawn into a competitive group but will still harbour hopes of qualification. Argentina will be the overwhelming favourites with the amount of talent at their disposal. Nevertheless, the erratic Diego Maradona will give the other teams hope of causing an upset in a one off match. Even so, it is likely that the Koreans will be battling for second place alongside Greece and Nigeria. The Greeks have also flattered to deceive since their defining moment in 2004 which saw them win the European Championships. This is the first time they have qualified for a major tournament since and they will want to make an impression. However, their squad possesses nothing to fear. The Nigerians quite clearly have the talent at their disposal but a lack of organisation may come back to bite them.

If they qualify in second place, South Korea will likely face France in Round Two. The French are currently low on confidence and Korea would fancy their chances if they meet in a knock out round. A quarter final encounter with England though may be just a step too far. 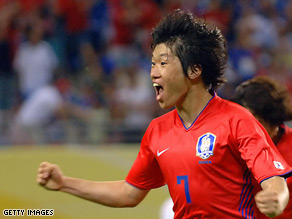 Despite not having a squad packed with stars, the Koreans are a resilient team who will certainly be in the running for second place. Nevertheless, they don’t have a fantastic record outside of Asia and they may just miss out on the knock out stages signalling a Group Stage exit.