A far from convincing Spanish performance saw them snatch a late winner to go on an win Group C. It took a late Jesus Navas tap in to win the game for a severely under par Spain who on the night were fortunate to take all three points. The Croatian defenders were convinced that Fabregas’ lob to Iniesta was offside which was incorrect. Croatia were undone by a piece of Barcelona brilliance late on and it was Croatia who fell short. The Spanish have set up a tie with either France,England or the co-hosts Ukraine.

Luka Modric was an influential figure all night with his eye of the needle passes and blistering runs in the centre of the park. The best chance of the game was created by the Spurs midfielder on the hour mark when his cross found an unmarked Rakitic who could only head straight at Casillas. All of Croatia’s robust defending had lead to an opening which they really needed to capitalise on. Bilic’s last game in charge was one to be proud of, they just fell short when they needed to step up. The first half it has to be said that Croatia were outclassed by the likes of Xavi and Silva but the Spanish lacked panache in the final third of the pitch. The Spaniards oh so nearly got it right with Silva and Iniesta nearly linking up to devastating effect and Torres was unlucky with a ferocious shot on 22 minutes. Many people now presume the only way to beat Spain is to stifle them and defend for your lives. You may be right. Bilic’s plan to stifle them seemed to be working as the first half continued and the slick passing was starting to become a little too ‘accurate’ according to BBC’s Simon Brotherton.

Croatian forwards were left with scraps to eat as far as they were concerned. A tired Mandzukic burst clear only too be felled inside the area by Sergio Ramos. The referee made his stance pretty clear and waved the strong protests away much to the bemusement of Slaven Bilic. Then the news began to filter through from Posnan;the stakes had been significantly raised. A goal from Croatia would all but put Spain on the next plane home and Croatia needed to score to stand any chance of qualifying from Group C. As the game progressed something in Croatia’s mentality seemed to change, they began to commit men and they sensed they had the Spaniards on the ropes. The introduction of Jelavic and Perisic was nearly devastating for the Spanish but the final pass was poor and Del Bosque could breathe again.  Time for Spain to stick or twist, Del Bosque knew he needed a goal and it just wasn’t coming from Fernando Torres. On came Navas and Fabregas to drag the Spaniards into the knockout stage of the competition.

Both sides had glorious chances to win the game in the final ten minutes when Fabregas took to long to get his shot away on the edge of the area and Perisic hit a tame volley at Casillas.  The final five minutes saw Croatia severely on the back foot as the Spanish midfield trio of Xavi, Iniesta and Busquets were starting to grab the game by the scruff of the neck.  Spain made the all important breakthrough three minutes from time when Fabregas’ clever pass found Iniesta who gave Navas the chance to walk the ball into the net. Both players exerted very different emotions: relief for the Spanish but sheer devastation for Croatia who haven’t had a bad tournament in my eyes. 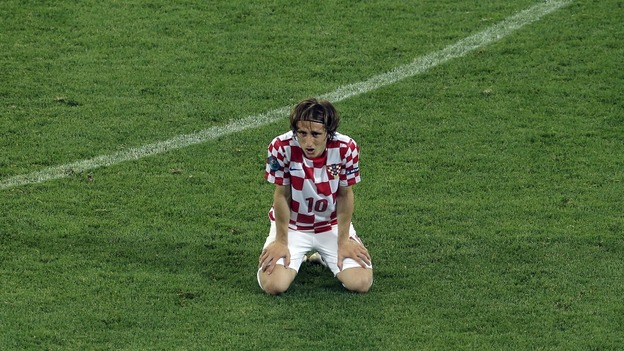