Football manager 2007, whilst fun to play, does in no way help your managerial skills. I used to be a bit of an addict (I count winning the Champions League with Leigh RMI one of the greatest achievements of my life) and before the Tottenham-Burnley game, considered myself to be a bit of a budding football ‘gaffer. I was a master of tactics, playing the customary 4-4-2 formation in every FM game and I knew which players to sign up in the transfer market. So when I called on fellow manager Harry Redknapp to drop Robbie Keane to the bench and instead field Peter Crouch, I thought I knew what I was talking about. However in the space of 90 minutes, a Robbie Keane scoring spree proved management wasn’t for me.

FM 2007- A fun game, but in no way representative of real life management

Joking aside, I’m sure I wasn’t the only Spurs fan who felt Keane wasn’t deserving of a first team place. The forward must have heard a few of these mutterings for he was extra pumped up for the Burnley clash. His bustling presence in the first few minutes caused Burnley problems, but it was his sublime skill in front of goal that killed off their hopes of getting anything out of this match.

Tottenham were pressing the Burnley defence throughout and their centre-back pairing had a torrid afternoon, struggling to keep up with the pace of the game. Their match got off to a bad start when a mis-timed lunge on Jermain Defoe in the box was ruled to be a penalty, and Keane commenced to open up his account with one of the finest penalties you’re ever likely to see. Jenas doubled the lead a few minutes later with a deflected shot, after Burnley forward Steven Fletcher was unlucky to see a good goal ruled out for offside.

The Burnley defenders had a tough time against the Tottenham attack

If the Burnley back-line were struggling, their strikers were at least making a game of it. Robbie Blake hit the post following a hideous Carlo Cudicini error and, truth be told, the player really should have hit the net. Burnley manager Owen Coyle looked crestfallen when he watched the shot hit the woodwork, and his mood was not improved by Robbie Keane’s second and Tottenham’s third, which came in the 74th minute. The Irishman converted Aaron Lennon’s low cross with a thumping shot that flew into the top corner. He completed his hat-trick just minutes later, this time beating Burnley ‘keeper Jensen with a low effort that flew into the side-netting.

At 4-0 the game was over and Keane’s fifth, a hopeful shot from an acute angle which wormed it’s way under the body of Jensen, merely proved that, for today at least, Keane’s every touch was magic. The final 5-0 scoreline was actually rather harsh on Burnley who could have came away with a point had they not been slightly unlucky in the first half. On current form they look too good to be relegated and they have some quality in their squad, but on this day the game really belonged to Tottenham’s four goal hero- Robbie Keane. 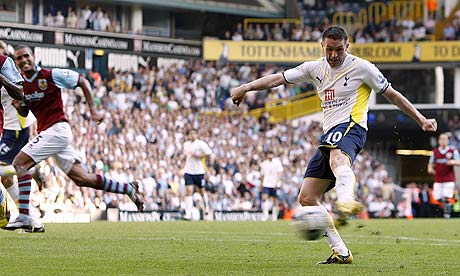