A Between the Sticks Look at the World Cup

As we have seen already at this tournament, a solid goalkeeper can be the difference between success and failure. And being a good ‘keeper is not just about making fifteen saves a game, but also about making saves when you have had nothing to do all game, but keep your concentration. Here, I will look at the goalkeepers who have given the most to their respective teams. 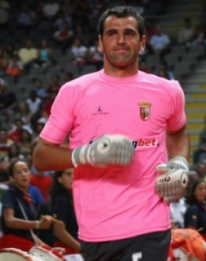 Portugal may be out of the World Cup, but largely thanks to Eduardo, they bow out having only conceded one goal. He managed to keep three clean sheets in the so-called ‘group of death’, which pitted them against Brazil, Ivory Coast and North Korea. And if it wasn’t for some inspired saves by the Braga ‘keeper in the Round of 16 against Spain, it could have been a lot more than one goal against their name. Eduardo has impressed throughout the tournament, and has arguably been Portugal’s best player.

The Nigeria goalkeeper was named man of the match in his side’s opening match against Argentina, despite the game ending in a 1-0 defeat for the Super Eagles. The Hapoel Tel Aviv ‘keeper may not have kept a clean sheet as Nigeria crashed out of their group, but he showed enough to suggest there may be some interest in him before the transfer window slams shut.

Brazil coach Dunga described him as the best goalkeeper in the world, and the Inter player has showed glimpses of that in South Africa. He won the treble in Milan last season, and has firmly filled a gap in the Brazilian team which has been crying out to be filled for many years. Julio Cesar let in three goals in the tournament as Brazil bowed out at the last eight, but the ‘keeper made some good saves, and helped his team out of a tough group. He hasn’t been at his best this summer, but Julio Cesar not at his best is still better than most. The Uruguayan is only 24, and only made his international debut in his side’s penultimate World Cup qualifier, but he has defied his lack of experience to have a brilliant tournament. Muslera may be young, but he has already established himself as first choice for both club and country, and had a solid campaign for Lazio. And he has been a big contributing factor in Uruguay’s success in South Africa, keeping a clean sheet in each of their group games. We have heard about La Celeste’s attacking prowess, but Muslera, along with a solid defence, has kept them tight at the back as well.

Luis Suarez – The next big thing?
Mesut Ozil: The Small Man With A Huge Reputation