Stoke claimed back to back home wins in the top flight for the first time since March 1984, and in doing so climbed out of the bottom three after beating Roy Keane’s Sunderland 1-0 at a chilly Britannia Stadium. Ricardo Fuller’s fourth strike of the season was the difference between the two teams in a match that was by no means a classic, but was surely a memorable one for Stokies.

Tony Pulis opted to start with an unchanged line-up following sunday’s 3-0 defeat at Manchester City while roy Keane made one change to his Sunderland side, starting with former Manchester United man Phil Bardsley at right back at the expense of Pascal Chimbonda.

It was the away side who created the first opportunity of the match in the very first minute, on form striker Djibril Cisse, fresh from North East derby goalscoring heroics, profiting from Andy Griffin’s unfortunate slip twenty-five yards out. His shot was tame though, and did little to trouble Thomas Sorensen in the Stoke goal, who saved comfortably to his right.

The hosts soon began to get a foot-hold in the game though, backed by the fans proven to be the loudest in the division, forcing an early corner from Danny Higginbotham’s deflected strike. Fuller had a good chance to give Stoke the lead shortly after, a trademark Rory Delap long throw falling kindly for him six yards out. The Delap/Fuller combination that was to prove so deadly later in the game was thwarted this time though, Anton Ferdinand blocking the Jamaican’s strike on the line.

The Potters were almost ahead six minutes later, Mamady Sidibe just failing to make contact with Seyi Olofinjana’s teasing cross before Phil Bardsley guided the ball just inches to the side of his own post, giving Stoke a corner.

A lull followed in the game, punctuated only by Olofinjana’s powerful left footed effort from twenty yards out that forced Sunderland ‘keeper Marton Fulop to save well down low. In truth, the shot was too central, either side of Fulop a goal would have been a likely outcome. Fulop himself spent the match being jeered and abused by Stoke fans, following his extortionate wage demands proving to be a stumbling block when a move to the Potteries looked likely in the Summer. Stoke instead signed Sorensen on a free transfer, a move that is looking increasing shrewd with every game as the Danish number one put in another good performance between the sticks.

Sunderland’s best chance of the half came shortly after the half hour mark with Cisse rising well to connect with Bardsley’s cross. The former Liverpool man could not guide his header on target though, and it sailed harmlessly over for a goal kick.

The first half finished with little to write home about, the Potter’s shading the game over a poor Sunderland side. Keane felt the need to change things at half time, bringing on former Stoke loanee and Trinidadian international Kenwyne ”The Penguin” Jones in place of his compatriot the veteran Dwight Yorke.

The second half continued with Stoke on top though, with Tom Soares, who was somewhat quiet on the night picking out Fuller in the box. A series of pinball-like deflections followed Fuller’s shot, with the ball finally falling towards Sidibe at the back post, who failed to make contact by a matter of inches, with a goal a certainty if he had done.

With just over twenty minutes remaining, puli made his first change of the night, bringing on new-boy Michael Tonge in place of Soares.

The game quickly heated up, with Sunderland’s Steed Malbranque being cautioned after clattering Higginbotham long after the Stoke player had cleared the ball in the air. Higginbotham was incensed by the incident, menacing towards the Frenchman with all the intent of a heavyweight boxer looking to finish a fight with one knockout punch. After being pacified by Delap, Higginbotham escaped uncarded and the game moved quickly on, Salif Diao, who was impressive on the night, seeing his crushing volley from all of thirty-five yards fly past the frame of the goal.

The breakthrough did arrive for Stoke shortly after, Delap being handed another chance to power a throw into the box following good work by Tonge. The Irish international gladly obliged, landing the ball on the head of Fuller, who rose well to give Stoke the lead, much to the delight of the 23,000 Stokies in the stadium. 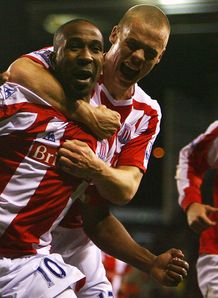 The lead could have been doubled shortly after, tonge slipping in Fuller with a perfectly weighted pass. The goalscorer scuffed his shot into his left foot though, and the ball rolled on to the base of Fulop’s left hand post, before drifting agonisingly behind.

The two-goal lead would have been a luxury that the home side didn’t really need, Sunderland hadn’t looked like scoring all match and didn’t now, creating only one notable chance in the twenty minutes following Fuller’s goal. That chance fell to Jones, the tall striker firing across Sorensen from a tight angle. The Dane was equal to it though, saving well down to his right and gathering the ball at the second attempt.

So Stoke, with Abdoulaye Faye and Ryan Shawcross leading excellently from the back, held on without too much difficulty to deservedly claim a third league win of the season. Next up is Arsenal at home on Saturday, and there’s no reason why it can’t be four after that one.

Back With A Vengeance
Stoke In Hunt For Ivorian Konan Ya