Stoke’s five match winning home run came to a rather indifferent end following a 1-1 draw with Hull at the Britannia Stadium this afternoon. Hull’s Jamaican forward Marlon King gave the visitors the lead on the stroke of half time in a match that was played under thick fog, before his international strike partner Ricardo Fuller won and dispatched (just) a second half penalty to give Stoke a share of the points.

Tony Pulis made two changes to his side from last weeks 1-0 victory over West Brom for the visit of the Tigers, bringing in former Hull centre back Leon Cort for Ryan Shawcross who missed the game with a back injury and top scorer Fuller came back into the side after missing the last game through suspension at the expense of Dave Kitson, who was out with a medial knee ligament injury anyway. Hull boss Phil Brown meanwhile made just the one change from the side that gained a hard fought point at Portsmouth seven days ago, preferring experienced striker Nick Barmy to Daniel Cousin.

Thick fog hangs over the capacity crown at the Britannia Stadium

Neither side managed to get any sort of foothold in the match, was was on the whole somewhat fragmented, until just before the quarter hour mark. Fuller used his pace well to get in behind the Hull defence and cut the ball back towards Amdy Faye on the edge of the box. The ball was always behind the Senegalese international though and he struggled to get a clean strike on the ball, which dropped for Rory Delap whose effort was scrambled away from goal.

For a few minutes following this opening, Stoke were on top. These minutes proved to be one of the most ridiculous I have ever seen at a football match. Firstly, Stoke forced a throw-in deep inside the Hull half, Rory Delap taking his long run-up to hurl his trademark missile in, only for venerable Hull substitute Dean Windass to block his passage by stepping in front of him before commencing stretching exercises, protesting his innocence to the knowledge that he was directly impeding the throw being taken. It was the sort of light-hearted moment that fans love to see at matches, and referee Keith Stroud was prepared to see it as such, laughing the incident off. Windass repeated the trick later in the half though, and was promptly booked for unsporting behavior without even entering the field of play.

The legacy of the Delap long throw clearly strikes fear into the hearts of opposition defences, and this became all the more apparent shortly after, with Tom Soares bearing down on Hull ‘keeper Boaz Myhill after a backpass. Myhill made the seemingly strange decision to stroke the ball behind for a corner, rather than out for a throw-in, much to the delight of the Stoke fans in the ground. The decision was largely an intelligent one though, if you consider the danger Stoke pose from a long throw. Seven goals have come from long throws this season while none have come from corners. Simple logic tells you that Myhill did the right thing.

Hull created their first chance twenty minutes in, danger man and top scorer Geovanni whipping in a high free-kick from the left wing. Thomas Sorensen in the Stoke goal attempted to claim the cross, but got nowhere near it, luckily for him Nick Barmby was only able to bundle the ball wide at the far post. Stoke had been on top to this point, but Hull were beginning to come into the game. The Humberside club saw most of the ball in the next twenty minutes, but failed to test Sorensen in any meaningful way, while Stoke notched their first attempt on target on 38 minutes, Cort’s flicked header from another long throw requiring good handling down low from Myhill.

The half seemed to be heading for a goalless finish, before former Tottenham man Dean Marney used his pace to move past Stoke captain Andy Griffin wide on the left. Griffin brought down the midfielder from behind, receiving a booking for the foul. Just as the two minutes of stoppage time at the end of the half were announced, Tigers’ left back Sam Ricketts whipped the free-kick into the box, the Stoke defence failed to clear and the ball was headed by Marney to King, who, crowing an impressive performance swivelled and fired the ball into the top right hand corner of Sorensen’s goal from twelve yards. 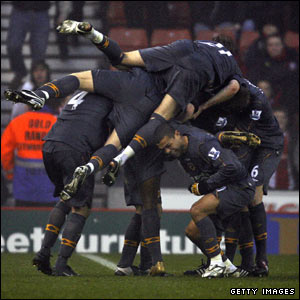 The second half began with neither side making any changes and Stoke pushing hard for an equaliser. Five minutes in, Fuller almost struck, rising highest to meet another Delap long throw eight yards out, powering his header low to Myhill’s right, only to be denied by a superb save be the American born Welshman. Amdy Faye then threatened for Stoke, picking up the ball in midfield and driving to the edge of the Hull penalty area where he was unfortunately only able to drag his left footed effort wide.

With an hour gone and the Hull defence still managing to stand firm, Pulis decided it was time for a change. He opted for the exact same switch that had proved so inspired against West Brom, Michael Tonge replacing Tom Soares in a straight swap on the right wing. Just a minute later, the substitution almost payed huge dividends, Sorensen punting the ball long upfield, Hull defenders Paul McShane and Kamil Zayatte getting in each others way and the ball falling to the lively Fuller just inside the eighteen yard box. Fuller knocked the ball left into the path of Tonge who seemed to be caught in two minds whether to shoot or pass, eventually sliding the ball across goal and just past the desperate lunge of Delap, who injured himself in the process.

This was a warning to Hull that Stoke were throwing men forward and creating chances, but it was Sorensen who was called into action shortly after, Geovanni laying the ball to Marney on the edge of the box who adjusted his feet well to striker the ball side footed on target, but in truth Sorensen would have been very disappointed to concede from the effort, smothering the ball low to his right.

On 72 minutes, another long Sorensen kick caused chaos, Fuller collecting Mamady Sidibe’s flick-on and knocking the ball past Myhill, who just clipped his trail leg and sent the forward crashing to the ground, Keith Stroud immediately awarding a penalty. Fuller later admitted that he had made the most of the contact, but there was contact nonetheless, and the penalty award seemed to be the right decision.

Fuller took the penalty himself and after the kind of jinking run-up that never instills confidence in fans he squeezed the ball into the net low to Myhill’s left, the ‘keeper getting a hand to the ball but failing to prevent it nestling in the corner of the goal.

With a largely deserved parity restored, the went forward in an ultimately vain search to find a winner, Sidibe failing to trouble Myhill with a long range effort before Leon Cort went closest to claiming all three points for Stoke. Tonge put in a seemingly mishit cross from the right channel which found its way through the mass of bodies in the box to Cort, who struck the ball from six yards out. His effort struck a Hull defender though, making it easy for Myhill to collect.

It was Hull though who created the last real scoring chance of the game though, Daniel Cousin, who had been brought on for George Boateng with ten minutes to go, cut inside and fired the ball toward goal, only to be thwarted by a very good block from Abdoulaye Faye, who put in another good performance in the heart of the Stoke defence, despite playing through the pain of a leg injury.

A draw it finished then, few could argue that this was not a fair result. Stoke probably just shaded the match, but never really created enough going forward to deserve all three points. The result mean Stoke climb one position to thirteenth, with eighteen points from fifteen matches, while Hull remain in the UEFA Cup spots in sixth, with 23 points.