With a draw guaranteed to take both sides through, Mexico and Uruguay surprised many people by playing out an exciting, end-to-end game. When Luis Suarez scored the decisive goal to give La Celeste the lead, it was evident from the players’ reactions that both teams wanted the win and to top the group, and the conspiracy theories were promptly shown the door. 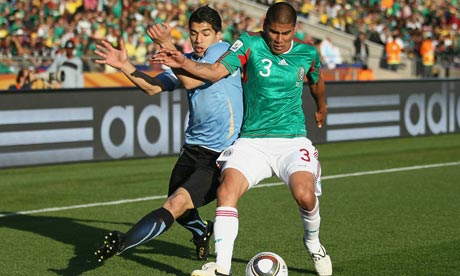 Many expected a dull stalemate, but were given an exciting encounter

Mexico were the ones who needed a win to top the group and avoid a tricky clash with Argentina, and they showed the fluid, attacking football which has won them many admirers, but Uruguay looked the more well rounded team. It was Mexico’s Andres Guardado who came closest early on, when he struck the ball from 30 yards, only to see the it rifle against the cross bar.

Luis Suarez could also have given his team an early advantage before he eventually opened the scoring, as he couldn’t quite squeeze the ball in at the far post. But with a fast-paced and exciting first half drawing to a close, the Ajax striker met a pinpoint cross from Edinson Cavani to head home at the back post.

Suarez celebrates his first goal of the tournament

Captain Diego Lugano almost doubled Uruguay’s lead in the second half, when his powerful header from a free-kick looked unstoppable, but Perez got down well to keep his side in the game. And in the game they were, as they continued to bang on the Uruguay door, but the misfiring striker partnership of recently released Franco and 37-year-old Blanco never looked likely to get an equaliser. Francisco Rodríguez came agonizingly close to scoring, though, as he dived to meet Barrera’s cross, but his contact was only enough to see the ball flash past the post.

By that point, news had filtered through that South Africa were leading ten-man France 2-1 and it looked as if the slim Uruguay victory would take both teams through. And that was how it finished, meaning Oscar Tabarez will probably be the happier of the two managers, with South Korea the next challenge for La Celeste, who are yet to concede a goal in the competition. For Mexico, an enticing encounter with Argentina awaits, with the winner of that game facing England or Germany.

I think it is fair to say that Group A has seen Uruguay put a real marker down on the competition, showing that they are potent in both defence and attack, scoring four goals and conceding none.