Tactical Analysis: How Chelsea knocked disjointed Manchester City out of the FA Cup 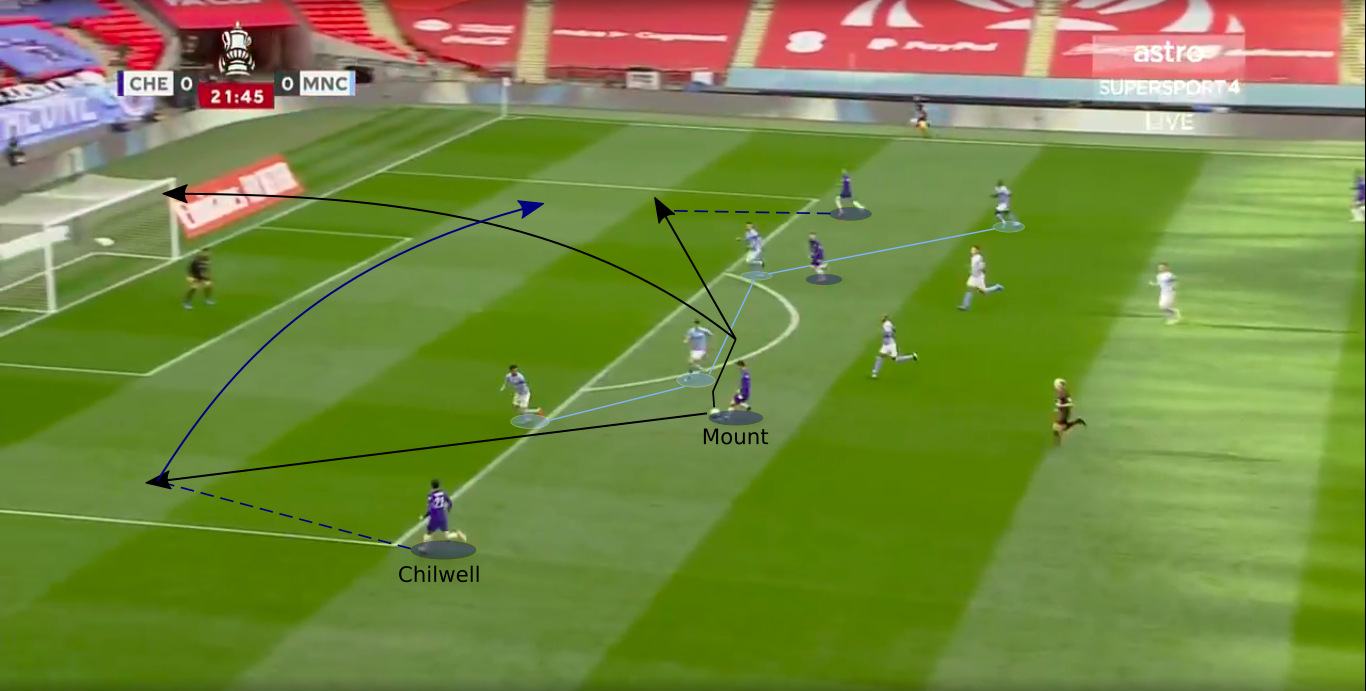 Although this was just a semi-final, Chelsea’s tie against Manchester City at Wembley felt like the biggest match of the 2020/21 FA Cup.

This was partly because the other semi-final involved Leicester City and Southampton, who were certainly not close to either of these sides on the form table.

Another intriguing undertone was that Pep Guardiola and Thomas Tuchel (who cites the ex-Barcelona manager as an inspiration) were meeting on an English pitch for the first time.

Both sides were involved in the UEFA Champions League quarterfinal ties in midweek, and both progressed by beating Porto and Borussia Dortmund on aggregate respectively, although Chelsea did lose on the night.

Before that, though, the Blues had beaten Crystal Palace in the Premier League by putting four past them, while a depleted City side succumbed to a 1-2 defeat against 10-man Leeds United. Therefore, two teams who had been near-perfect of late entered this match in stuttering form.

Chelsea emerged deserved 1-0 winners as Hakim Ziyech’s second-half strike ensured a place in the final for Tuchel’s side. In this analysis, we will attempt to break down how the Blues pulled off this important victory, while also focusing on some of City’s struggles.

City were very clear with their approach out of possession, as they pressed Chelsea high up the pitch from kick-off.

The very first action of the match saw Gabriel Jesus press Thiago Silva, who played the ball back to Kepa Arrizabalaga. The keeper was also pressurised by the Brazilian striker, so he had to punt the ball away aimlessly, allowing City to turn possession over easily.

This was a key part of City’s plan – getting the ball to the Chelsea goalkeeper and putting him under pressure to force him to put a foot through it – but they did not really get too much joy out of it after the opening stages as Kepa attempted only three chipped long passes from open play after the fifth minute of the match.

City pressed Chelsea’s 3-2 build-up shape using the front-four of their formation. Jesus was tasked with chasing Silva down, while the two wingers – Raheem Sterling and Ferran Torres – stayed close to the two wide centre-backs – César Azpilicueta and Antonio Rüdiger respectively.

Kevin De Bruyne marked either Jorginho or N’Golo Kanté, while he was supported by a winger (Sterling in this case) for the other Chelsea midfielder.

The two Chelsea wing-backs were pressed by City’s full-backs, who pushed high up the pitch to do so.

Here, you can see Benjamin Mendy coming forward to close down Reece James…

…and here, João Cancelo has pushed forward to stay tight to Ben Chilwell.

City were running quite a risk by pressing Chelsea in this manner, and they were left exposed in transition a number of times.

Their main weakness was De Bruyne against two Chelsea midfielders, which made the Belgian international’s task quite difficult. The fact that City were operating with two defensive midfielders meant that if the 29-year-old creator lost one of Chelsea’s double pivot, he would have a lot of space in the middle of the park.

In this case, De Bruyne goes to close Jorginho down, leaving Kanté free in the process. Chelsea just need to string two simple passes together to find the Frenchman in a lot of space.

The ex-Leicester man helped it onto Ziyech, who works to exploit the next weakness in the City defence. This was located out wide, where the away full-backs could get caught out as they pushed far up the pitch to press, as Mendy has done here.

Naturally, this left the defence quite narrow, so a cross to the far post was the best option. James did just that to find Chilwell, who failed to get the right contact on his shot and missed well wide.

Every time De Bruyne was bypassed, Chelsea would have acres of space to work with in midfield and could pose a serious threat in transition, but as we saw in the above example, they always failed to capitalise. Their goal came from a different method.

Although Chelsea managed just five shots to City’s 11, they were clearly the more threatening side in attack as is proven by their higher xG.

Aside from threatening City in transition (as we saw previously), the Blues also constructed their attacks quite well.

City’s 4-2-3-1 was fairly narrow in defence as you can see here, meaning that cross-field passes could be used to hurt them. Chelsea’s favoured direction was right to left, as they attempted nine such balls from the midfield third.

The reason they did so was that they had two very potent attackers on that side in Mason Mount and Chilwell.

Mount had the ability to chop onto his right and shoot from the edge of the box, while also being able to run at a defender and beat him one-on-one or slip a through pass. Chilwell, meanwhile, possessed good pace and crossing ability, meaning that he too could pose problems to the City defence.

Both of them were quite successful too, as Mount got three dribbles and drew as many fouls, while Chilwell managed to deliver three crosses.

However, Chelsea were most potent when playing direct football, which is how they scored. Ziyech’s 55th-minute strike had been coming for a long, long time.

Chelsea almost scored a near-identical goal in the sixth minute. Chilwell played Timo Werner (who happened to be offside, which is why the goal did not stand) through on the right after both Cancelo and Rúben Dias made tough work of dealing with a simple long ball, with the latter’s half-hearted clearance falling to the Chelsea wing-back.

Once he was through on the left, Werner simply squared a first-time ball to Ziyech, who turned it in without any problems.

The goal did not come as a result of an aerial ball, but it too was quite direct in nature. Silva took a free-kick at the edge of his penalty area quickly, and just two passes later, Chelsea found themselves in this position:

Once again, Werner was making a run down the left channel goal-side of both Cancelo and Dias, and this time, the German striker ensured that he was onside.

Zack Steffen positioning here was questionable at best, but even if he was in his goal, saving Ziyech’s tap-in would have proven to be quite difficult.

It was clear that Chelsea’s forwards possessed too much pace for City’s backline to deal with, and this was most evident when Ziyech had the chance to bag a brace as he only had Steffen to beat after Chelsea breached the City high line through a long ball.

Guardiola fielded a much-changed side that arguably only had three players from City’s current best XI – Dias (who looked uncharacteristically shaky), De Bruyne (who went off injured) and Rodri (who saw relatively little of the ball).

The other eight players were afforded the chance to stake a claim to regular starting spot here, but they absolutely failed to deliver.

The man who had the biggest opportunity here – Sterling – probably flopped most spectacularly as he put in a terribly weak performance where he was dispossessed four times, which was more than any other player on the pitch.

At the same time, City’s tactics were not exactly on point either, as their four-man press was evidently incapable of troubling Chelsea, while two holding midfielders made the centre of the park quite disjointed.

This should explain why the away side looked a lot better after Phil Foden and İlkay Gündoğan came on the pitch, but Guardiola’s reluctance to use any further substitutions was quite puzzling, and it took away any serious chance of a comeback.

Although City were clearly not on it, Chelsea deserve a healthy amount of credit for not just beating, but outright outplaying the Premier League leaders. Their defensive structure should be applauded too, although it wasn’t really tested as City posed nearly no threat in possession for most of the match.

The Blues certainly fielded most of their first-choice names, all of who absolutely turned up and put in some great shifts to book themselves a spot in the final.

They will face Leicester City or Southampton, so Tuchel will certainly fancy his chances of making the FA Cup his first piece of silverware with Chelsea.