Tactical Analysis: How Manchester United got their front-line firing against Roma 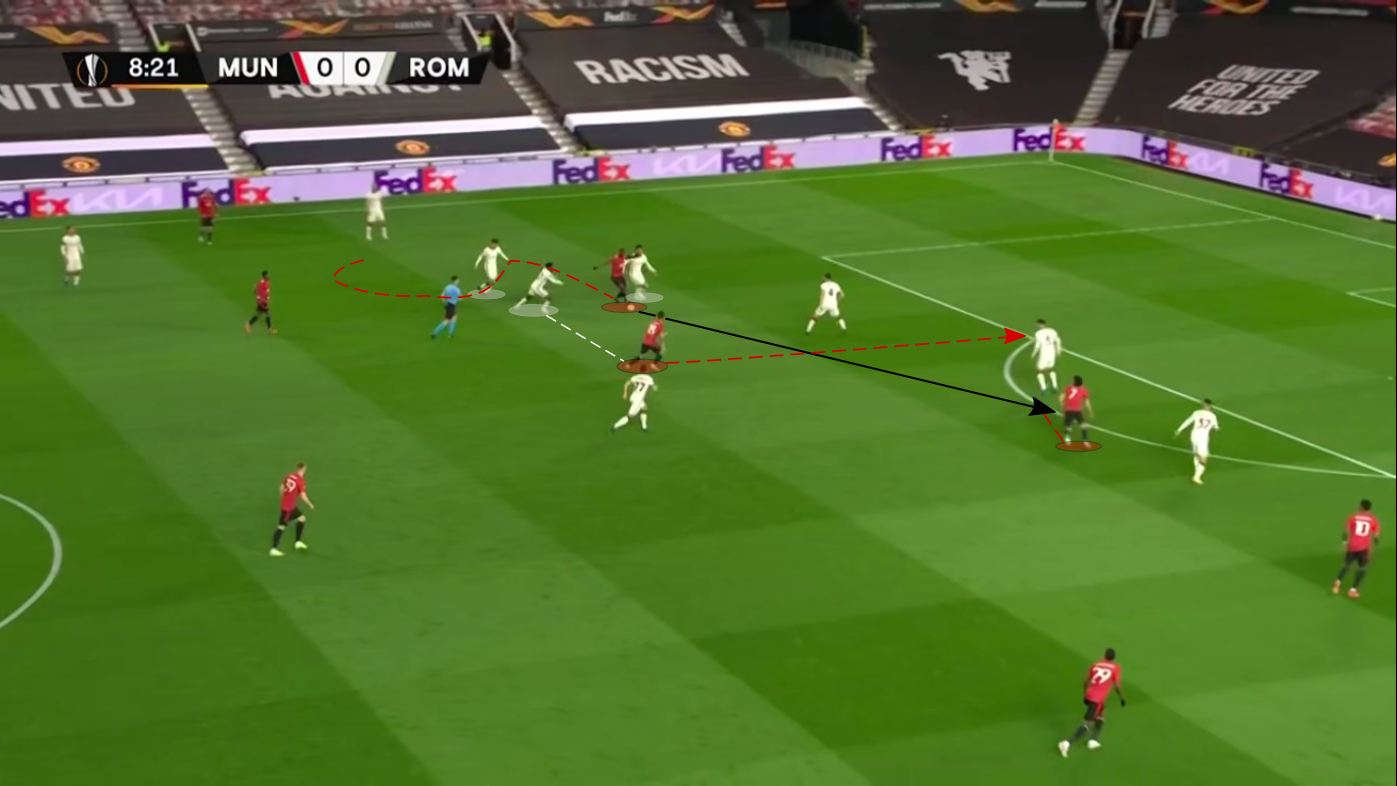 The second clash proved to be considerably more eye-catching, as it saw the Red Devils come back from a 1-2 deficit at half-time to earn an emphatic 6-2 victory.

Naturally, their attackers were the stars of the show that saw them effectively put a foot in the final, so we will take a closer look at Edinson Cavani, Bruno Fernandes and Paul Pogba in this analysis.

Conceding six goals probably means that your defence was not too successful, but let’s take a look at how Roma were set up out of possession to understand what United were up against.

The Italian side had an intriguing 5-1-3-1 shape in defence, which did not involve any high pressing. The wing-back dropped in the defensive line as usual, while Jordan Veretout (and later Gonzalo Villar, who replaced the injured Frenchman in the fifth minute) pushed up from midfield to join Lorenzo Pellegrini and Henrikh Mkhitaryan, while Amadou Diawara was the sole holding midfielder.

Their main attempts to stop United centred around Fred, who they attempted to box in at all times as he was the hosts’ main link between their back-three in possession (which included Scott McTominay) and the rest of the side.

As you might imagine, they were less than successful here, but our focus is elsewhere. More importantly for this analysis, though, they used a man-marking oriented system at the back, which included Chris Smalling following Pogba.

Fernandes and Cavani received similar treatment, as they were watched closely by Diawara and Roger Ibañez (who was often supported by Rick Karsdorp) respectively.

Rashford was positioned wide on the right for most of the match, so he was naturally picked up by Leonardo Spinazzola.

The last time United used a front-four with Cavani at striker and Marcus Rashford, Fernandes and Pogba behind him, they defeated Tottenham Hotspur 3-1. Pogba stole the show in that match, while Fernandes was restricted to more of a supporting act.

Looking at the pass-map and average positions, the problem starts to become a bit clearer – Pogba, Cavani and Fernandes were a bit too close together.

The problem was particularly pronounced for the Frenchman and his Portuguese teammate, as the pair of them took very similar positions when dropping deep to help with the build-up.

Naturally, Tottenham tracked Fernandes more closely using their midfielders, but Pogba was often free as he dropped back from the left-wing position. Therefore, he stole more of the spotlight as he was the key player in United’s possession-play.

That was the first major change made for the Roma match, as Pogba’s positioning was considerably deeper than that of Fernandes.

The Frenchman took on the mantle of assisting his side’s build-up play, while Fernandes operated further forward. This is proven by the fact that Pogba played the most progressive passes in the match, while his Portuguese teammate received most of those.

The presence of a back-three involving McTominay and Fred at the tip of the diamond created along with it remained untouched as previously discussed, but there was a notable difference further forward as observed with the average positions maps of the two matches in question.

This time around, Fernandes often pushed further enough to get in line with Cavani, while Pogba took up a position similar to the one he had against Spurs.

When he stayed back, Fernandes would occupy the right side while Pogba stayed on the left. By leaving the central area empty, the two did not get in each other’s way while leaving either with enough room to drift horizontally on either side. As evident in the average possession maps, Rashford always stayed high on the right.

Both United full-backs were encouraged to get forward too, although Shaw certainly was the more adventurous due to the nature of Pogba’s positioning which created more space for him to run into.

The major advantage of getting Pogba, Fernandes and Cavani clicking is that you not only get three fantastic footballers operating in tandem, but you also have three brilliant footballing minds working on the same wavelength.

This was epitomised in United’s first goal, which started off with Pogba receiving a short pass with his back to goal and Smalling quite tight to him.

The French international then did what he does best as he swerved around his man and got past a couple of other players too, including Diawara, who, if you remember correctly, was tasked with marking Fernandes.

Given the fact that he had just freed up the Portuguese international with his dribble, a pass to Fernandes would make sense for Pogba. But, he instead attempted to find Cavani, letting Fernandes go on a textbook third man run.

The ball to Cavani attracted the Roma centre-backs to the Uruguayan striker, which meant that all he had to do was slip a simple pass into Fernandes’ path, leaving the ex-Sporting man to finish in style with a calm chip.

United’s second came after a quick transition following a turnover, but once again, it involved the terrific trio of Pogba, Cavani and Fernandes.

Things started off with the Frenchman once again. This time, he picked the ball up after picking up Fred’s pass and then driving forward, attracting three opponents with his strong gravity. This naturally freed up those in front of him, so he played a simple ball into Cavani.

The Uruguayan striker then cushioned it into the path of Fernandes, who was making a run from deep as well.

The scorer of the opener returned his favour to Cavani by driving the defence back to the box and firing the ball into the striker’s feet with a no-look pass that tricked the defence into thinking he would play the ball to Rashford. The finish that followed was typically accurate for the ex-PSG hitman.

The full-backs were also involved in United’s third goal. With the ball out wide, Shaw, Pogba and Fernandes worked the ball around to Aaron Wan-Bissaka on the other side through some quick passing.

The English defender lined up a shot, but his attempt was saved. The ball only fell to Cavani, though, and the Uruguayan striker made no mistakes from close range.

One parallel from the Tottenham match was Mason Greenwood coming off the bench to add a late goal. This time, it came as a result of another transition where Fernandes helped the ball onto Cavani, who flicked it on first time into the path of the substitute.

The 19-year-old forward took it in his stride and entered the box, before thumping it home in some style to make it 6-2.

Although Greenwood did score, his overall impact in 15 minutes was not too different from Rashford’s, although United’s massive lead might be an explanation for that. The other three, however, were just sensational.

As this rather complicated map shows, the three combined very often in this match, creating and taking six shots among themselves. Three of those efforts ended up in the back of the net, of which two moves involved the whole trio.

United’s attackers were simply sensational in this match – particularly in the second half – as they punished a rather poor defensive set-up on Roma’s part.

As we have seen in-depth, Cavani, Fernandes and Pogba were absolutely on fire, racking up five goals and assists for four among themselves. Further, they had 12 shots, created 10 chances and took 178 touches.

In contrast, Rashford’s zero shots, one chance created and 45 touches look quite bland, clearly indicating that he is not the right man to join this trio.

Therefore, the position of right-winger remains up in the air for United, though Greenwood looks to be the best option right now.

Should United secure a contract extension for Cavani this summer and find an answer to their problems on the right, their attack will be a serious force of nature next season by this evidence.

Stats courtesy Between The Posts and WhoScored.