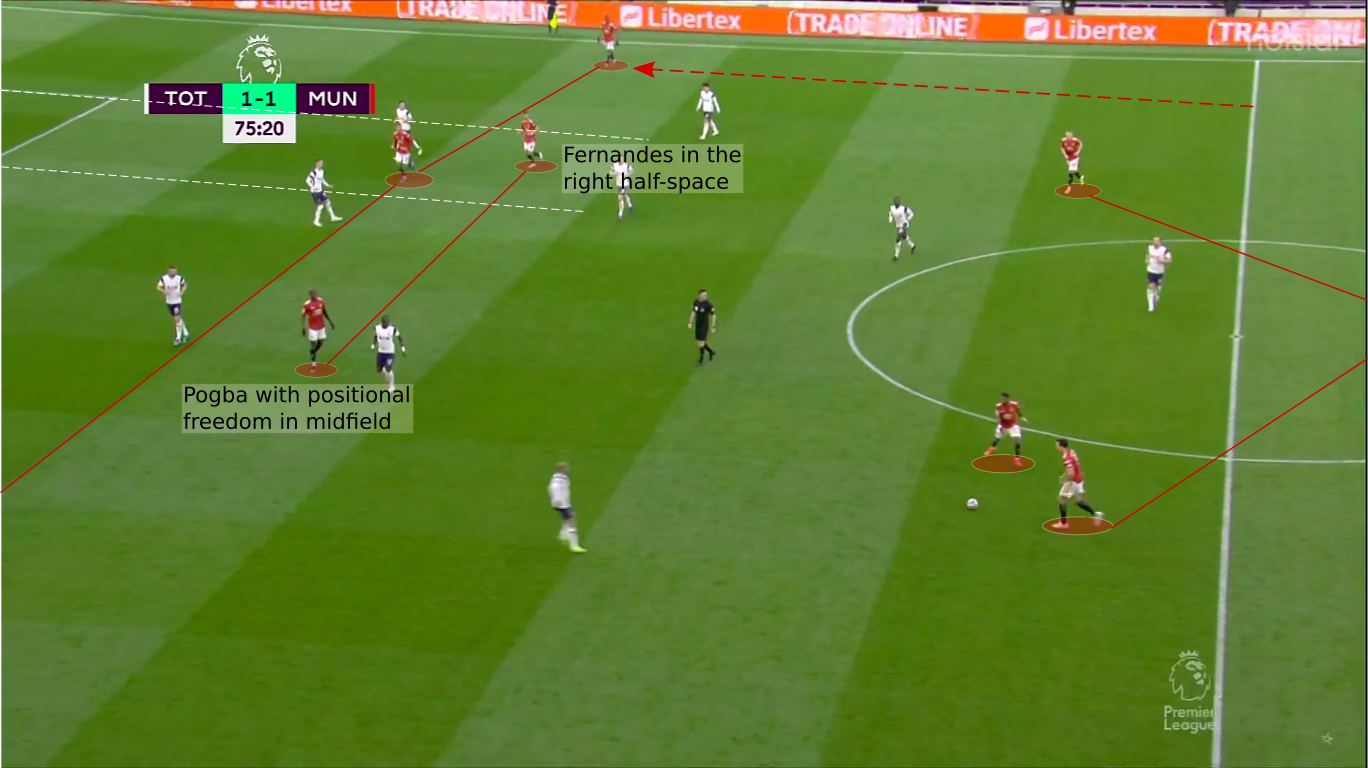 Tottenham Hotspur hosted one of Jose Mourinho’s many exes on Sunday for a key Premier League clash with Manchester United.

Ole Gunnar Solskjaer’s men were subject to a 6-1 drubbing the last time they met Spurs, but the two sides have gone on opposite trajectories since then.

The Red Devils were in the runners-up spot in the league and in contention in the Europa League with a two-goal lead to take into the second leg of their quarter-final against Granada.

By contrast, Spurs were fighting to stay in the race for European contention in the Premier League, while their Europa League hopes had been ended by Dinamo Zagreb.

United emerged 3-1 victors on this occasion, with yet another comeback following a much-improved second-half performance.

The result could well have confirmed their spot in next season’s Champions League.

In this analysis, we will dissect the surprisingly open match from United’s perspective and take a look at some encouraging signs for the visitors.

Solskjaer used Marcus Rashford on the right in his 4-2-3-1 to accommodate Paul Pogba on the other flank, a decision that was questioned by some as the Englishman had looked significantly better on the left. However, this proved to be the right decision, as we will see below.

Tottenham pressed in a 4-1-4-1, as both Giovani Lo Celso and Tanguy Ndombele pushed up to mark United’s two holding midfielders.

Harry Kane pressed the centre-back in possession while keeping his partner in his cover shadow, while the two wingers stayed close to the two full-backs.

Their PPDA (Passes allowed Per Defensive Action) dropped from a season average of 11.54 to 8.43, indicating that they were significantly more successful at turning the ball over high up the pitch.

The Red Devils transitioned into a sort of a 3-3-1-3 in the progression phase and beyond, as Scott McTominay dropped to the right of the centre-backs, Fred stayed central in midfield to create a diamond along with the back-three (where Harry Maguire pushed forward), the full-backs pushed up (especially Luka Shaw as Pogba tucked infield) and Bruno Fernandes had positional freedom between the lines.

Due to Spurs’ 4-1-4-1 press, they often left pockets of space in midfield in transition. This is where Pogba came into the picture, as he dropped into these spaces to receive the ball and provide a great ball-progression option with a number of runners ahead of him.

Another advantage of pushing Pogba into a central position was that he could take on Serge Aurier one-on-one with Shaw occupying Lucas Moura.

In such positions of danger, the Frenchman’s close control and skill could make a telling difference.

He showed all of that for United’s controversially disallowed opener. First, he moved across Aurier to receive a pass from Fred.

With a tight touch, he controlled the ball and turned to face the goal. Pogba then pulled out a couple of tricks, before slipping a pass through the defender’s legs towards the run of Edinson Cavani (whose selection was equally important as he had a great understanding with Pogba and made some very lively runs).

Overall, though, the rest of the United side did not look too bright in the first half, so changes had to be made at half-time.

With a deficit to overturn at half-time (again), Solskaer made a few tactical tweaks at half-time.

The most notable change saw the full-backs make attacking runs in transition when United broke through the Tottenham press. With added runners in the wings, the visitors’ attacks from such situations became a lot more potent with better end-products.

A few minutes after United’s equaliser (which came from the second phase of a set-piece), Mourinho made a defensive substitution as he swapped Lo Celso for Moussa Sissoko.

After this, Tottenham stopped pressing and dropped into a 4-2-3-1 mid-block instead, with Sissoko and Pierre-Emile Højbjerg forming the double pivot.

This meant that United now had a lot of time in possession, as is proven by the fact that they saw nearly 60% of the ball after this substitution.

Their formation in possession morphed into a sort of a 3-1-2-4, as Pogba had positional freedom in midfield ahead of Fred while Fernandes overloaded the right by operating in the right half-space and Greenwood, Cavani and the two full-backs formed the front line.

The Red Devils’ second goal came as a result of some sweet interplay on the right.

It started with Aaron Wan-Bissaka feeding the ball into Fernandes in the right half-space as Greenwood made a run ahead of him.

Also, notice how Pogba is in between the Tottenham lines in the lower half of this frame. Because of his potentially dangerous position, Aurier is torn between marking him or going with Cavani – a dilemma that would prove to be very costly.

Fernandes then squeezed the ball into Greenwood between the defender’s legs, and Aurier was in trouble as Cavani was making a run while goal-side of him.

Greenwood delivered a brilliant first-time cross, and as Cavani was ahead of Aurier, he had an unchallenged route to the ball, but still had to pull off a diving header to cap off a superb team move.

The provider for the second then added a third goal himself, as he showed great composure and finishing in stoppage time after another moment of sheer class from Pogba, which well and truly put the game to bed.

Overall, this was a great success for United. They must have felt robbed and aggrieved in the first half after not only losing what seemed a perfectly good goal but also conceding to the one cohesive move that their opponents put together.

But, the Red Devils bounced back big time, with Solskjaer’s tactical tweaks and substitutions proving to be bang on the money.

More encouragingly, though, United won a match where Fernandes did not look particularly great. The Portuguese international certainly had an off-day yesterday, but for the last year or so, the entire team’s performance has been riveted on his show.

That was not the case this time, and perhaps even more encouragingly, it was Pogba who stole the show.

Another positive was that the Red Devils broke down a defensive side and looked at their best when Spurs were not pressing.

This was good to see because they have relied heavily on transitional moments for their goals this season and struggled against low blocks such as Sheffield United and West Bromwich Albion.

For Spurs, this surely is the final blow to their Champions League hopes (which would reportedly mean losing Kane) and might even prove painful in the context of next season’s Europa League.

Bouncing back to the Premier League: Why Norwich City’s imminent promotion is more impressive than meets the eye
Social media boycott is well-meaning but ineffective in fighting racist abuse