The Premier League Returns – My Team Of The Week! 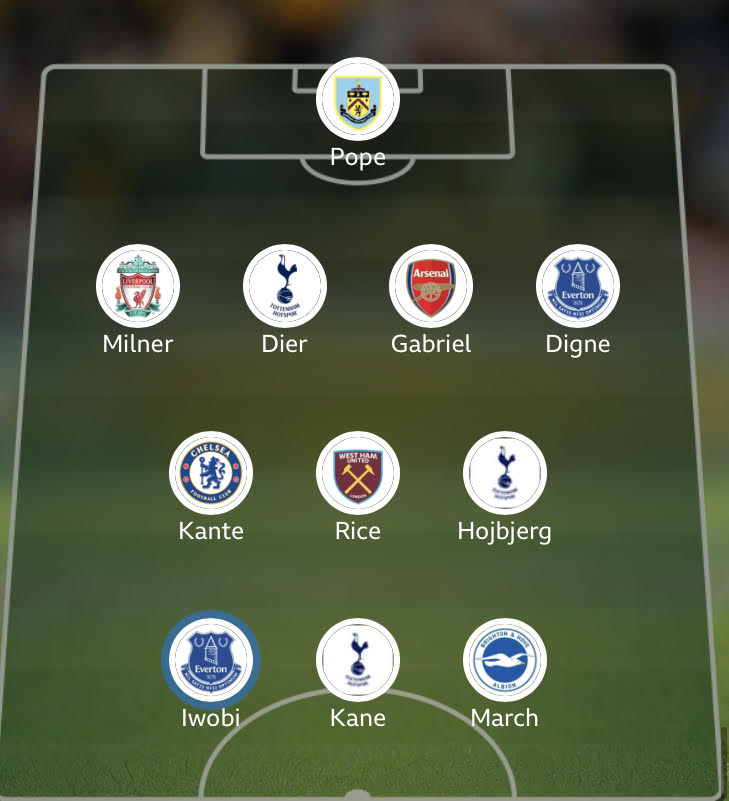 After a slightly more routine weekend of Premier League football, I have chosen my team of the week!

Goalkeeper
I’m not entirely too sure what else Nick Pope can do to solidify his place in the England eleven. The Burnley stopper is having another brilliant season and has been so consistent these last few years since taking the No.1 shirt off Tom Heaton. He produced one of the saves of the season already against Palace yesterday evening and was a big reason for Burnley’s first win of the season.

Defence
Although there were a number of performances to be acknowledged, I’ve gone for a back four of James Milner, Eric Dier, Gabriel and Lucas Digne. Starting with the veteran who came in to replace Alexander-Arnold in what would be a challenging fixture against Leicester City. For a man who has had limited game time this season, he looked like he was playing every week and the way he managed Harvey Barnes was simply a performance to admire for any up and coming right backs. Superb reading of the game and he had the audacity to show off his versatility by moving into midfield whilst Liverpool were leading the way by three goals to nil. Eric Dier has been absolutely brilliant since Jose has come in and he’s looking the real deal since grabbing the centre back position. He’s showed maturity, real calmness on the ball and of course that element of grit which is required. He exampled these traits against a Man City team who despite maybe not being brilliant on the day, still found it difficult to break the wall with Dier being a pivotal piece of that. Moving on to Gabriel who since he arrived at the Arsenal has proved he can quite literally tackle the Premier League. Arsenal who had to survive just over forty minutes with ten men made sure they secured a clean sheet with Gabriel looking after an inform Patrick Bamford. Lucas Digne fills in at left back and he proved how important he is for Everton not just defensively but in an attacking sense also. The Frenchman contributed two assists in their win over Fulham and has shown how pivotal he is for The Toffees on that left hand side.

Midfield
Again there were a few players in the middle of the park who caught the eye, so had the difficult task of choosing only three. Although Chelsea faced a very poor Newcastle side, it was another very good and typical display from N’golo Kante who last season struggled with injuries but now looks to be back on form. He spent a lot of the game in that pocket between the two centre backs and the halfway line, which is where he is if not the best at covering ground and being a real pest for the ball when the opposition are on the attack. A good and solid display by the man and will please Frank Lampard greatly that he’s back at it. Declan Rice wins another vote for this week as he showed once agin why he’s a regular under Gareth Southgate for England in the middle of a three. His improvement on the ball has been phenomenal over the last 12 months and he displayed this against Sheffield United. Rarely loses the ball and a tough tackler who will not shy away from any battle, a real sturdy performance from the young hammer. Next in the three is in my opinion one of the signings of the season in Pierre-Emile Højbjerg, who like Eric Dier has been one of the top performers under Jose and since coming in has been a real box-to-box player for Spurs. A man with unbelievable fitness and an edge proved once again against City how vital he could be for the men in White this season. His resilience on the ball and quality with his short passes is someone who although may go under the radar, will prove how decisive they can be going forward and back in transitions.

Forwards
Once more this was very difficult as I have left players out such as Calvert-Lewin and Tammy Abraham who both were brilliant over the weekend. I’ve chosen three who I felt had such an impact during the teams wins and for that reason Alex Iwobi gets the first nod as he was someone although up against a deflated Fulham defence, showed real determination and bravery on the ball and was key in their first half performance which was performed at real intensity and drive. Solly March is a player who is arguably the most improved this season under Graham Potter and was able to secure the win for Brighton over Aston Villa with a superb finish into the top corner. He’s been fantastic on that left hand side and seems to have kept a real level of consistency over these last nine games for the Seagulls.  Last but most certainly not least is the England Skipper, who once again demonstrated his world class ability in his new No. 10/9/8 role. Jose has not only got Harry Kane Linking brilliantly with Son Heung-Min, but he’s also turned him into a midfielder who possesses passing ability almost as accurate as Kevin De Bruyne and tackling ability up there with the best of them. It’s a role which looks like madness when you watch him but he has flourished in it and on Saturday he tore that City defence to shreds with his cleverness and overall astuteness.