It has arrived. The Premier League season is well and truly upon us. After a dramatic finale to last year’s title race, this year, even the most sceptical better wouldn’t call odds upon the title being decided on a goal in stoppage time. However, towards the end of last season, the title was, very much, a two horse race between the two Manchester clubs. On the other hand, this season has started off in a very open fashion, and although it’s still early days, possible title contenders are emerging. 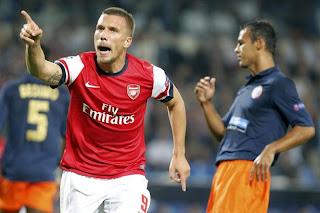 The first team on my list are Arsenal. The summer transfer window saw two players ,that were vital to their 3rd place finish, leave for other clubs. One was their talisman and former captain, Robin Van Persie; the other, Alex Song, a skilled central defensive player to say the least. I, personally thought that Arsenal would collapse into themselves and fall into mediocrity, but how wrong could I be. Arsene Wenger again used his magical managerial skills to conjure up an Arsenal side strong enough to prove a few points. Bar their game against Chelsea, their defence has been looking solid and organised; and despite the absence of one Van Persie, the goals have been coming in, with new boys Cazorla and Podolski looking to have bonded into the team very well, they are displaying their potency. 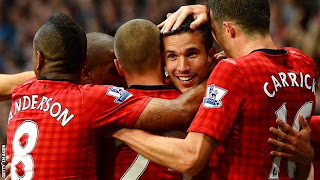 Two other teams that are without doubt going to be fighting for the top spot this year are Manchester United and Manchester City. These Manchester based heavyweights are serious contenders considering that the the latter are the reigning champions and the former was the runner up for last year. Manchester United have used the transfer window to their advantage as they have acquired the formidable striker Van Persie from previously mentioned Arsenal. He has taken no time at all in racking up the goals, he is currently the top scorer for United, challenging Rooney as the top dog in attack. In addition to that, they purchased a Japanese ace, Shinji Kagawa, who’s natural pace and creativity has already improved United’s midfield and  all round play. However, The team is placed 3rd in the league after a disappointing loss to Tottenham. Sir Alex Ferguson will surely be rectifying any problems that would prevent United aiming for a number 1 finish this year, as they always do. 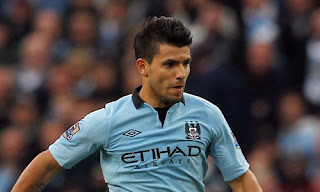 Another no-brainer is Manchester City. After their Arab owners pumped millions into the club, last year, their toils paid off and they were rewarded with a Premier League title. Their squad is one of, if not, the best in the league and they are not short of money to help back it up. However, despite their plethora of quality players, some have raised their eyebrows against Roberto Mancini’s side. They are saying that City are suffering from the dreaded “second season syndrome”. City are yet to be beaten in the league with three wins and three draws, but their performances have hardly been convincing. Situated at 4th in the league, I believe Man City are in for a shout this year, and they have the squad to do it, but they need to focus on clean sheets and efficient attacking before they can seriously consider repeating last year’s terrific success. 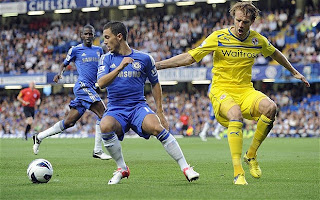 The last team on my list, but by no means the least, are the reigning European champions, Chelsea. After their stellar Champions League victory, they have started their Premier League campaign in scintillating form. They are unbeaten with 5 wins and 1 draw and sit on top of the table, clear by 3 points, They also have let in the least amount of goals so far and have the best goal difference. Attacking wise, no introduction is needed for their skilled lineup of Juan Mata, Eden Hazard and Oscar. Chelsea’s play has been exciting to watch and Di Matteo has managed to do what Villas-Boas could not in integrating youth and a better playing style, within an ageing squad. Chelsea are looking good this season and they have a lot of promise. The transfer window has enabled Chelsea to transform their squad into a team deep with attacking talent and a solid defence, however, it has also led to the departure of a certain Didier Drogba. With Fernando Torres slowly regaining his lost form, Chelsea fans may not need to worry about the loss of a legend, however, Chelsea will always miss having the option of booting it up to the big Ivorian and letting him work his magic. If the Blues can keep up this early form and stay atop of the table, there is no doubt they will be in the mix for the title come the business end of the season.

and give me your opinions

Wake You Up When September Ends
Who should replace Manchester United’s Fergie?