Was Andre Villas-Boas’ (a.k.a. AVB) first season in England a complete failure? Chelsea was fifth in the league, and trailing 1-3 to Napoli in Champions League when he left. Roberto Di Matteo earned Roman Abramovich his dream trophy but Chelsea still finished fifth in Premier League, only to qualify for next season Champions League through the defending champion rule.

The root of AVB’s failure in Chelsea was that he could not read the Russian millionaire’s mind. The three year “project” is to slowly phase out the older generation, like Nicholas Anelka, Didier Drogba, Frank Lampard, but delivering titles are as always the top priorities. AVB could have been thinking about rebuilding a new Chelsea era within three years.

Not all the Tottenham fans are behind the appointment of AVB, given his disastrous season with their fellow London rivalry. However, there are couple of reasons which would give them a more positive reaction towards their new Portuguese manager.

First of all, Tottenham has already proved they have the assets to become one of the Big4 in the Premier League. The loss of Modric will be a big blow, but Tottenham has always been regarded as having one of the strongest benches in Premier League. The addition of Sigurdsson, Vertonghen, Adebayor and maybe followed by Lloris and Moutinho, demonstrates that they are addressing correctly their weaknesses in the squad. 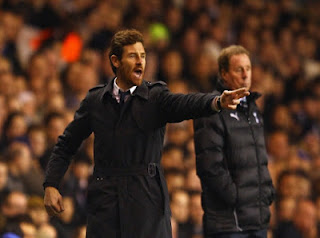 Although Harry Redknapp has brought competitiveness and success to Tottenham, there is something missing in his philosophy to transform Tottenham into a title challenger — tactics. His inability to maintain the squad fitness and make game-changing substitutions was widely criticised. Although AVB’s talents in tactics are yet to be revealed in England, expectation would be high given his assistant coach career under Jose Mourinho, a masterclass football tactician. 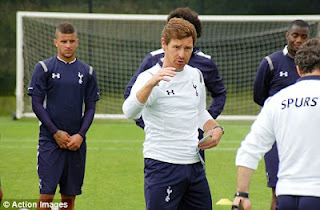 Kyle Walker, one of those who publicly speaks of his support to his new manager

More importantly, the target for Tottenham in 2012-13 is as clear as ever, Champions League football. The flirt about title challenge last season might have overwhelmed and disillusioned the players, which could be evident in the 2-5 loss in Emirates Stadium. Now they are focused and strongly determined to regain what they have gifted away last season.

Andre Villa Boas’ ability has already been proved in Porto. He is nothing short of motivation after his frustrating and forgettable year in Stamford Bridge, but this was also a year that matures the 35 year-old manager, who had come under intensive spotlight for the first time in his career.

Chelsea has a core group of very strong characters. In contrast, Ledley King, Michael Dawson, Gareth Bale and Scott Parker are those who would rather do the talking on the pitch than in the dressing room. A less chaotic dressing room could help AVB regain his focus in football. Together with the support from a chairman like Daniel Levy, do not write off Tottenham’s chance to be the leading club in London again after a 17 years spell.