José Mourinho led his Spurs side against one of his former employers, Manchester United. Both sides needed points in their quest for Champions League football. 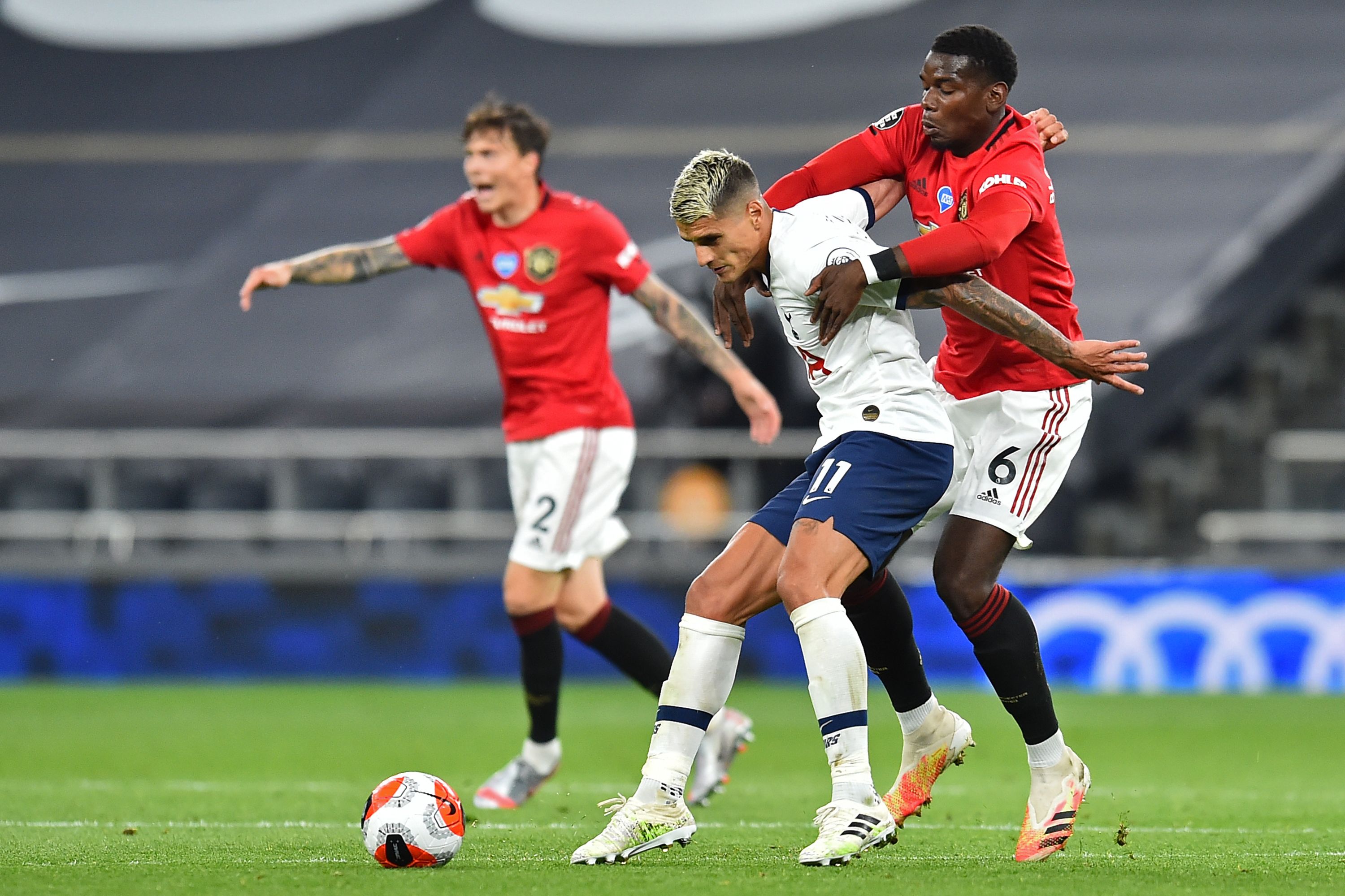 United had the first big chance in the 23rd minute, when Fernandes’ cross was headed down to Rashford, whose finish was kicked away by Lloris.

Two minutes after the first cooling break, Tottenham found themselves in front. Bergwijn made Maguire look like a piece of cardboard as he ran through the attacking third, and then unleashed a shot straight at De Gea. But, the goalkeeper’s hand only managed to parry it into his own net, gifting Spurs the lead.

Four minutes later, Bergwijn was bursting down the right again. He whipped a cross to the far post, where Son headed across. However, De Gea made amends for his mistake by plunging to his left and tipping it over the bar.

United started dominating in the second half. They had a glorious chance in the 66th minute when Martial let fly from the edge of the box, but Lloris made a flying save to keep his side ahead.

Finally, in the 80th minute, Pogba went around Dier, who then nudged him down in the box. Fernandes took the resulting penalty, and brought things back level with a composed finish.

In the 90th minute, Fernandes went down in the box, and Jon Moss pointed to the spot. After a VAR delay, the decision was overturned, much to the approval of Mourinho.

In the last minute, Greenwood found some space to shoot on the right side of the box, but his shot went wide.

So, it ended 1-1 after a very intriguing clash for the European spots.

Tottenham played like a classic Mourinho side. They tried to defend deep, and hit United on the counter through the pace of Son and Bergwijn. In the second half, José deployed the old bus, but unfortunately for him, it was breached by one of his former favourites, Paul Pogba.

United were gifted free possession by Spurs. They tried to make use of it by playing through Fernandes in midfield. After Pogba was brought on, the midfield pair tried to work together to create some openings.

Hugo Lloris – Made quite a few very good saves to keep his side in the match. 7.25

Serge Aurier – Gave the ball away a few times, but he was decent down the right. Did well to win the second ball in the build-up to the opener. 6.5

Davinson Sánchez – Looked good at the back, and made a good number of clearances. 6.5

Eric Dier – Was solid at the back, as he made a good number of important blocks. Gave away a needless penalty, though. 6

Ben Davies – Did well down the left to keep step with the speedy James. Failed to have an effect up front, though. 6.5

Moussa Sissoko – Screened his defence well, and made quite a few good challenges in the process. 6.5

Harry Winks – His distribution was alright in midfield, but he failed to have any attacking impact. 6.25

Son Heung-min – Worked extremely hard down the left. He was Tottenham’s main outlet in terms of attack, and he held on to the ball well. 7

Érik Lamela – Was fairly good in attacking midfield, as he worked hard off the ball to retrieve it through pressing. 6.5

Steven Bergwijn – Got rather lucky with the goal, but he showed a good burst of pace and dribbling skills to get the shot away. Looked decent otherwise too. 6.75

Harry Kane – Clearly seemed to lack match sharpness, and had little to no impact in the game. 4.5

Gedson Fernandes – Failed to do too much after coming on. 4.5

Giovani Lo Celso – Didn’t have an attacking impact, but he did well to help out at the back. 5

Team – Tottenham looked dominated for the first 25 minutes, but they got a half-lucky goal thanks to Bergwijn’s pace and a few mistakes from United’s defence. They defended well thereafter, and sent the bus on in the second half. However, a poor mistake from Dier led to a penalty being awarded, and they had to settle for a draw. Overall, they performed like a typical Mourinho team, and will be glad that there were no fans in the stadium to hurry them on. 6.25

David de Gea – Made yet another howler for the opener, but did well when he had to deploy the acrobatics. 5.75

Aaron Wan-Bissaka – Solid at the back, as he did well to keep Son in check. 6.75

Harry Maguire – Looked like a traffic cone just before the first goal. Defended well thereafter, though. 6

Luke Shaw – Good at the back, and created a couple of chances as well. 6.75

Scott McTominay – Alright in midfield, but was solid defensively once he moved to centre-back. 6.5

Fred – Decent in midfield, but he had no creative spark. 5.25

Daniel James – Saw a bit of the ball down the right, but failed to make things happen. 4.75

Bruno Fernandes – Was United’s chief architect, as he pulled the strings from midfield. Created a collection of chances, and his distribution looked majestically precise. Converted the penalty with conviction as well. 7.5

Marcus Rashford – Had a few good chances, but failed to create any massive impact. 5.25

Anthony Martial – Rather quiet up front. Had one big chance, but only managed to draw a save out of Lloris. 4.75

Paul Pogba – Was a great impact substitution. Brought a spark into his side after coming on, and seemed to work well with Fernandes. Won the penalty too. 6.75

Mason Greenwood – Failed to make too much happen after coming on. Had a great chance towards the end, but he dragged it wide. 5

Team – United dominated possession for most of the match, and looked set to get the opener early on. However, after some questionable defending and goalkeeping, they went a goal down. Apart from Fernandes, they lacked spark for most of the match. But after Pogba was brought on, things changed, and they finally managed to get an equaliser. They came close to a winner, but their finishing was not exactly top-notch. However, they were indeed the better side overall. 6.5

Jonathan Moss got most of his calls right, Though he pointed to the penalty spot for a second time, VAR helped him correct his decision. Decent display overall. 7

Tottenham stay 8th, and only have a 2 point buffer to Arsenal, who can overtake them with a win against Brighton.

United also hold on to 5th place, and they too can drop a place down to 6th after Sheffield play Newcastle.