The Hornets Sting the Foxes to Suck Out a Draw

Watford faced high-flying Leicester for both teams’ first match post-lockdown. The hosts needed points in their fight against relegation. 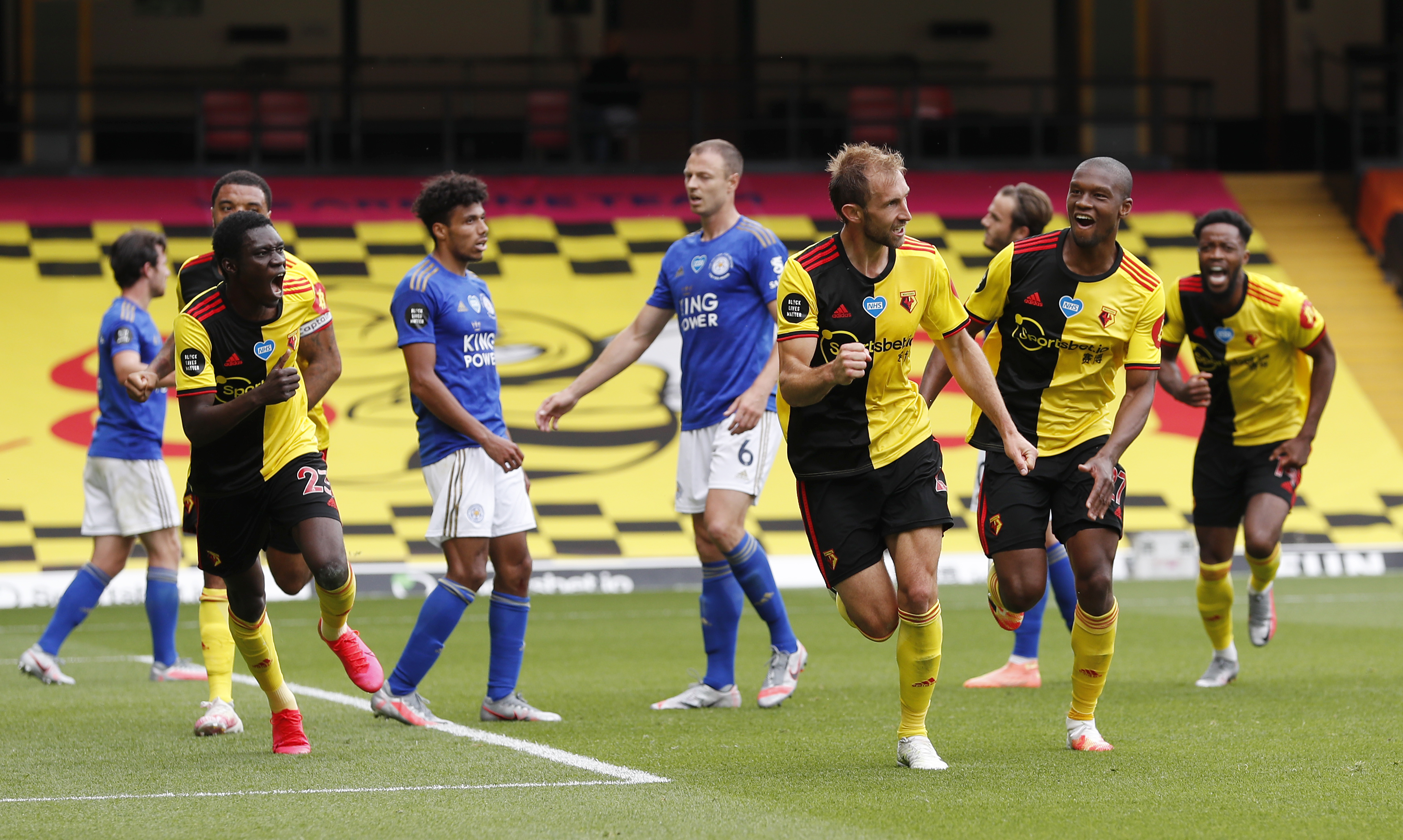 After a cagey affair, Watford had the first big chance. Ndidi lost the ball to Deeney, who found Doucouré with a pass. The Frenchman let fly from the edge of the box, but Schmeichel was able to keep it out.

2 minutes into the second half, Sarr was through on goal, but Leicester’s goalkeeper was there to bail his side out again.

Leicester started getting better though, and they had a big chance in the 74th minute, when Gray found Albrighton on the edge of the box. The winger hit it first time, but he could only rattle the woodwork after Foster got a fingertip to it. The ball fell to Gray, who rolled it for Maddison, who could only draw a save out of Foster.

And they finally went ahead in the 90th minute, when Chilwell absolutely smashed one into the top corner.

But 3 minutes later, a corner broke to Dawson who had his back to goal. The centre-back unleashed an acrobatic overhead kick, and though Schmeichel got his hands to it, he couldn’t keep it out.

Watford looked to sit back and absorb Leicester’s pressure. After retrieving possession, they tried to use the pace of Sarr to hit the Foxes on the counter-attack.

Leicester tried their best to break through the Watford defence for most of the match, but they lacked a creative spark.

Sarr vs Chilwell – Sarr ran riot down Watford’s right side, as Chilwell was nowhere near as good as him in terms of defence. Luckily for him, Schmeichel made a couple of big saves to deny Sarr from getting a goal. And in the end, the full-back got a goal with a cracker..

Ben Foster – Great in goal, as he made a few great saves towards the end. Can’t be blamed for the goal, though. 6.75

Kiko Femenía – Good defensively, as he kept Barnes quiet. Didn’t have a similar effect on Gray, though. 6

Christian Kabasele – Made a few crucial challenges at the back, as he tried to contain Vardy. 6.75

Craig Dawson – Made an array of clearances and blocks to keep Leicester away from his goal. Won a point for his side with an absolute belter as well. 7.75

Adam Masina – Was alright defensively, but he didn’t have any attacking impact. 6

Étienne Capoue – Failed to get up to speed with the match. 4

Will Hughes – Solid in holding midfield, as he made a lot of tackles and challenges in the process of screening his defence. 7

Roberto Pereyra – Worked hard down the left, especially defensively. But, he failed to make things happen in attack. 5

Abdoulaye Doucouré – Had one big chance in the first half, but no impact apart from that. 4.25

Ismaïla Sarr – Made an absolute nuisance of himself down the right flank. He was miles ahead of Chilwell, and had a couple of great chances, but was denied by Schmeichel. 7

Troy Deeney – Worked hard up front, but had very little to work with. 5

Danny Welbeck – Failed to have an attacking impact, but he helped his defence well. 5

Team – Watford did very well to absorb the pressure early on, and even created a couple of massive chances too, but were kept out by Schmeichel. After going down rather undeservedly, they did well to rescue a point. Decent showing overall. 6.25

Kasper Schmeichel – Made a number of massive saves to earn a point for his side. Arguably could have prevented the goal. 7

James Justin – Slotted in very well at right back, as he was strong at the back, and threatening up front too. 7.25

Çağlar Söyüncü – Solid in defence, as he did very well to track Sarr whenever Chilwell lost him, which was very often. 7

Ben Chilwell – Good going forward, but his defensive weaknesses were thoroughly exposed by Sarr, who gave him absolute nightmares on the pitch. Scored an absolute belter late on. 6.25

Wilfred Ndidi – Solid in holding midfield, as he broke down a number of Watford’s counter-attacks. 6.75

Youri Tielemans – Alright in midfield, but he failed to have an impact at either end. 4.75

Harvey Barnes – Didn’t have any impact on the match. 4.5

James Maddison – Tried his very best to make things happen in attack, and worked hard tracking back too. 6.5

Marc Albrighton – Decent down the right, but didn’t have a major impact. Was really unlucky when he hit the post. 5.75

Jamie Vardy – Failed to do anything up front, as he had little to work with. 4.5

Demarai Gray – Created a few good chances after coming on. 6

Team – Leicester started off well, but then were hit by Sarr’s pace on the counter. They had to rely on Schmeichel to save them a couple of times, and were lucky to have a clean sheet at the hour mark. After Chilwell put them ahead through a wonder-strike, they should have done better to take the win home. 6.25

Craig Pawson had a very relaxed day at the office, and will be happy with his performance. 7

Watford move one place up – to 16th spot, and have a point’s cushion to the relegation zone.

Leicester, of course, stay third, and have a 6-point buffer either side of them.