This will be my last blog for a week because I’m going on holiday to Bulgaria and while I’m there I hope we’ll get a couple of good signings for when I get back.

Andre Bikey
The powerful Reading fullback is once again interesting Stoke City and now also Fulham. A very crazy person personality wise with this shown in two examples; The first one was the sending off against Burnley where he ripped off his top in anger and started stamping around in a temper. The other example is a match while on international duty for Cameroon where Ghana we’re treating Cameroon captain Rigobert Song in injury time and they wanted to take him off; so he pushed the Ghanaian physio with some force and got sent off!. So do we need this man?; Well no not really he’s just another Sonko waiting to happen; at £3m and not as good as Andy Wilkinson it’s really not worth it but I think this will happen and this will not inspire me at all. 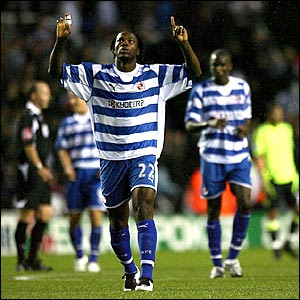 Guirane N’Daw
His name has been mentioned again and with reports coming from last season that if Stoke stayed up and his current club Nantes went down there would be a buy out clause to join The Potters if this is true the deal is a very likely one. He’s a big, strong and powerful midfielder who would improve us in central midfield and would be a very impressive buy.

Lomana LuaLua
The former Newcastle man is believed to be considering quitting his riches in the Middle-East to come back to England to join The Mighty Potters. He’s a speedy and tricky winger and can also play as a striker would be a good signing and another step towards our progression; however I can see him upsetting the mood at The Britannia with his antics of been notoriously known for been a disruptive player behind the scene’s. He will improve our attacking options and would give good competition to Matty Etherington & Liam Lawrence; He wouldn’t be an expensive signing at nothing more than £2.5m so he’s worth the gamble

Rasmus Elm
It’s reported Stoke and fellow Premiership teams Everton & Fulham are interested in signing the Swedish midfielder. Elm has had a very impressive Euro U21’s Championships which has sparked all the interest in this talented man and at the age of 21 he already has 9 caps and scored 1 goal so there must be something about this lad to be so highly rated in his homeland. He wouldn’t be an expensive purchase but it’s one of those links where there is no good substance and very unlikely with Merseyside & London been a more preferred destination.

Latest Transfer News In The Potteries
Whitehead Wings In