Trouble ahead at Rangers – Birmingham City bid for Miller accepted

On Friday the announcement was made to the media, one which Rangers fans up and down the country had been dreading…an offer for striker Kenny Miller had been accepted by the Glasgow club. The bid, believed to be in the region of £600,000 to £700,000 had come from Birmingham City. It appears to be the clearest sign yet, that the Lloyds banking group are making the key decisions at Rangers Football Club. As soon as the news broke, questions were already being asked about why Rangers had accepted the bid, where the goals would now come from, where the money from the transfer would go, and would the player be replaced by anyone? 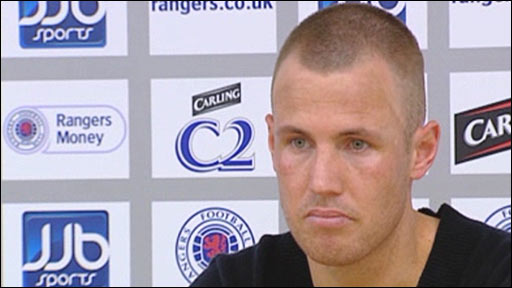 The acceptance of Birmingham’s offer for Miller has now raised several questions about the running of Rangers Football Club, and their current financial plight at the hands of the banks. The situation could be questioned by the cynics; questioning Miller on stalling on a contract extension, stating that it is value for money considering Miller only has 6 months left to run on his current contract. But those remaining 6 months could be precious to Walter Smith and his team, if he has Miller at his disposal each week. Currently he is the SPL’s top scorer, netting an impressive 21 times in the league this season. As Miller was granted permission to open negotiations with the West Midlands outfit, the question was raised, ‘Can Rangers win the SPL championship without Kenny Miller’?

Without the presence of Miller and his 21 goals so far this season, Rangers would have only managed to score 18 times, with Steven Naismith coming closest to Miller with a paltry 5 goals. This would suggest that without Miller, Rangers are basically surrendering the league to their arch rivals Celtic, something which is unimaginable in the blue half of Glasgow. Surely this is something more than a ‘calculated risk’ from the bankers? If Rangers are indeed being dictated to sell Miller, rather than lose out on any fee for him at all in the summer, then without doubt the Lloyds Group are stripping Rangers of the only genuine chance left to retain the league title this year. Miller’s presence alone in the Rangers first team this year has seen them fight on after losing prolific goal predator Kris Boyd to Championship team Middleborough last summer. His hard work, tireless endeavour and all round willingness to run himself into the ground for the champions has seen him go from villain to light blues hero.

It now appears that if the deal goes through for Miller, Rangers will move for Dundee United striker David Goodwillie. It is widely believed that the money from the Miller deal will go toward the transfer fund required to acquire Goodwillie from United. Rangers have already had a first enquiry rebuffed by Dundee Untied Chairman Stephen Thompson down to the transfer fee being unacceptable. It is thought an offer of between £1.5 and £1.7 million pounds would be enough for United to sell their key asset. Although the money from the transfer would go to the fund for David Goodwillie, would this move really benefit the current champions, and would it be enough to give them the league title, despite Millers absence? Now this is by no means placing any disrespect on David Goodwillie, however when entering the business end of the league season, fan are looking for strikers to find the net weekly in an attempt to spearhead the league challenge. Could Goodwillie live up to this expectation and would he build on the 10 goals he has scored this season already with United?

The situation is now one that the player himself is in control of, and one which the bank has orchestrated. The one thing that now looks definite though, is that in the next 3 weeks, Rangers are resigned to losing Kenny Miller to another club, unless the player himself decides to hang around until the summer.

It now looks set to be a waiting game for the Rangers fans, and a transfer window of discontent.

Barcelona are BEATABLE
AC Milan 4 – 4 Udinese: And they say Serie A is slow…