Andre Villa-Boas’ comeback season looked even more difficult after opening the season with a setback at St James Park. Nevertheless, Tottenham hijacked last week’s headlines not because of rumours about losing confidence in their new manager, but late transfer news. It could easily unsettle a club under renewed management, yet both Tottenham and AVB are well-trained to handle the August mess.

The shorthanded striker force is strengthened by the return of Adebayor, but more than 7 players are rumoured to be on the way out, including starter Jermain Defoe and Rafael Van der Vaart, with the latter replacing the disappointing Sigurdsson tonight. 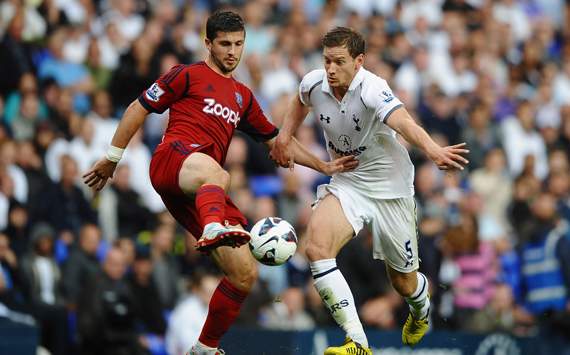 The team appeared to be spiritual, boasted by the chanting of the home fans. Steve Clarke was not overwhelmed by the 3-0 win against Liverpool. Gera and the injured Odemwingie were replaced by Graham Dorrans and Marc-Antoine Fortune, who are both more committed to defence and could help contain the Tottenham wingers.  It proved to be a correct tactical change, as Tottenham were well-aware of their strengths at both flanks, especially when Liam Ridgewell and Steven Reid are not speedy full backs themselves. Both were embarrassed in the first half by wingers running at their backs, but Aaron Lennon and Van der Vaart could not convert the cut back crosses.

West Brom were happy to sit deep in the first half and absorb the pressure. Although with a handful of possession, Tottenham’s crosses were threatening but never converted. Meanwhile, debutant Vertonghen had a relative relaxing 45 minutes.  He started dreadfully with a stretching miss that was rescued by Sandro’s tackle on Fortune. Since then, he showed accurate tackling, timely forward runs and excellent vision in passing. If not because of his weaker right foot, the fastbreak he led with Bale would have already brought a 1-0 lead to Tottenham.

On the other hand, Shane Long hardly got his feet on the ball, while Fortune tried to test Vertonghen with his physical strength. Tottenham seemed to be on the upperhand, but Steve Clarke clearly had a plan in his mind.

Tottenham is never the most persistent team in Premier League. Goalless stalemate can easily unease the team. While Defoe showed diminishing intention in passing and Bale was growingly inclined in moving to centre of the field, Tottenham became more and more toothless. Emanuel Adebayor was the man to turn to in order to add some physical presence up front. He proved his value in merely two minutes, when Defoe found himself in space and fired past Ben Foster, but only to be ruled offside.

In the blink of an eye, substitute Romelu Lukaku nearly haunted AVB with a fierce left foot shot only for Friedel to parry it away brilliantly. The alarm has rung as the huge Belgian possessed obvious advantage over the aging Gallas.

The impatient fans welcomed another new arrival, Sigurdsson, for his home debut. Similar to Lukaku, it didn’t take long for him to make an impact on the game. His corner had indirectly led to Tottenham’s goal – a deflected long shot by Benoit Assou-Ekotto. The leftback had already seen his earlier freekick saved by Ben Foster. This time, he needed a little bit of help from Dorrans to keep the goalkeeper stone to the ground.

Defending a 1-0 lead is far from easy. Lukaku made it even harder for the Yids. The solid Vertonghen did not back down in containing his compatriot, blocking Lukaku’s effort with a well-timed slide. Assou-Ekotto seemed destined to be the unlikely hero of the match, when his goal-line clearance of McAuley’s header was helped by the crossbar. 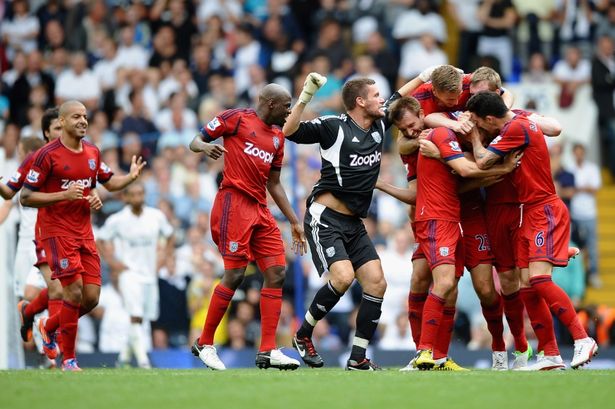 Everyone in the stadium, though, could feel a goal was coming. Numerous deliveries from Chris Brunt had finally resulted in James Morrison’s goal, after a brief chaos in the Tottenham box following a corner. Tottenham was left in despair, while the Baggies celebrated as if they had claimed the league title.

Steve Clarke’s tactics for the match were well-justified, and it could have easily been three points for them if not of Brad Friedel’s outstanding performance. West Brom deserved all the credit. The injury-time equaliser was a massive blow to AVB and his team. There were still some positives for the Yids to cheer about, notably the convincing debut from Vertonghen as Michael Dawson looks certain to leave, but it is becoming increasingly urgent for AVB to notch his first Tottenham victory.