Wigan Athletic: Another Roberto Who Deserves to be Under the Spotlight

While Roberto Mancini is embracing a dramatic season at Manchester and Roberto Di Matteo has single-handedly overturned Chelsea’s fate this, another manager named Roberto played a miraculous trick just 16 miles northwest of Manchester.

Roberto Martinez never looked like the man to power Wigan back to the level of performance they endured in their glorious first season in Premier League. Nevertheless, he has quickly built up the reputation as an expert in relegation battle, having twice escaped from demotion Championship in his first two seasons at Wigan.

The fans would be of no surprise to find their club once again in the bottom three of the table after Christmas, and the sluggish defence shown by Wigan was worrying. The aging legs of Alcaraz, Caldwell and Boyce had exposed their below-par positioning at defence. Ronnie Stam is more of an attacking full-back, whereas Figueroa has been teased by Premier League quick right wingers.

What made worse was the fall-out of Rodallega, the hero of last season’s survival, which further weakened the already uncreative and unproven striker force. A goal difference of -20 with almost 2 goals conceded per game in December summed up the story.

The young Martinez was not afraid and did not wait until the last minute to make a drastic change. After a disastrous January, Martinez re-organized the backline by lining up three centrebacks, playing a 5-4-1 formation rather than the 4-5-1 they preferred throughout the season. 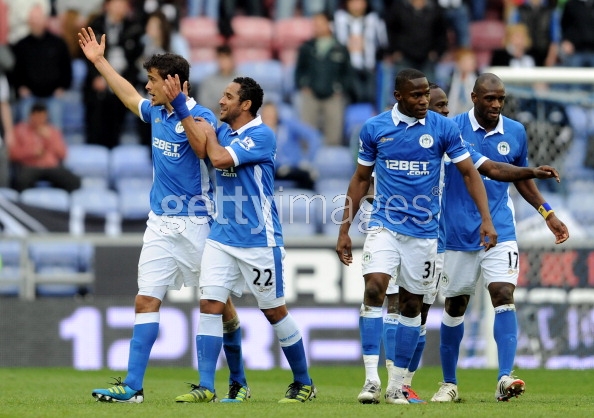 Wigan players celebrate a 4-0 first half

The extra man at the heart of the defence proves to be critical to Wigan. Gary Caldwell’s leadership is vital in the defensive line, while Figueroa’s shift to the centre adds some pace. Boyce is released back to his comfort zone on the right and new boy Beausejour provides some spark and energy on the opposite flank. The restored stability has alleviated their reliance on Al Habsi’s magical hands and brought about a tremendous improvement by allowing only twelve goals in thirteen games since February.
Stellar defence led Wigan to notch up points after points and won back the confidence of youngsters like Moses, Di Santo and McCarthy. Despite an unjust defeat at Stamford Bridge, wins against Liverpool (away), Arsenal (away), Manchester United and Newcastle United were not down to pure luck, especially when their oppositions needed to triumph as much as they do. 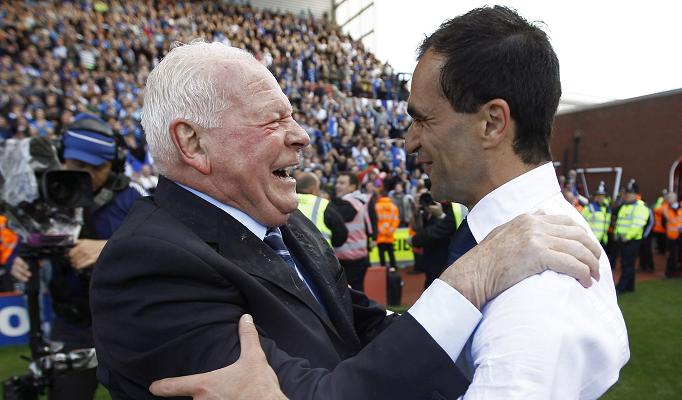 Probably the happiest chairman in the league

Martinez perhaps could have made the chances earlier to avoid another relegation battle but he is now just two games away from conjuring a miraculous rescue to Wigan’s Premier League status, sitting 3 points above the last four teams as well as having the best goal difference amongst. The Spaniard, with his determination, motivation, tactical flexibility and never-say-die attitude, might well just be ready to “get one of the top jobs in Europe” as his ecstatic chairman Dave Whelan suggests.