Working hard on and off the pitch at Spartans

Many were surprised that it was Annan Athletic and not Spartans who took the place of Gretna FC in the Scottish Football League when Gretna folded in 2008. The facilities Spartans have at their ground at Ainslie Park are superb for a club plying its trade in the Amateur league. 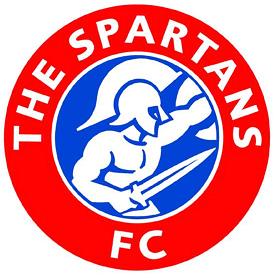 At their old home-ground, City Park, Spartans have had two great Scottish Cup runs in recent times, eliminating SFL sides and playing ties against SPL outfits Livingston and St.Mirren. The latter escaped Edinburgh with a 0-0 draw and won the replay 3-0 at Love Street.

The club is renowned for its fantastic infrastructure and facilities, as well as its football. For many years it has produced talent on the pitch, and off it has a reputation for strong community values. As journalism students and avid football fans, we decided to go along to Ainslie Park to have a look for ourselves at their top of-the-table clash against Edinburgh University.

On arrival at the club, the impressive facilities are clear to see. The complex consists of a 3G-astro-grass full sized pitch, small five-a-side courts and, of course, a grass playing surface. What is most refreshing to see is that all are in use; with a Spartans under-19 team playing on the astro and a five-a-side court occupied as well. However the facilities are not only restricted to football. 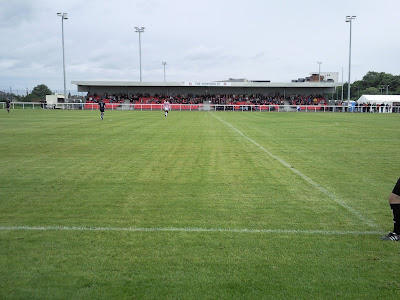 The club boasts an all-seated stand which holds 504, stretching the length of the pitch, and an upstairs café and lounge, with a balcony for viewing the action behind the south facing goal. Overall the ground can hold up to 2,400 supporters.

As kick off approached the stand filled up, near to capacity, and the players emerged from the dressing rooms. As soon as the first ball was kicked there was a cheer from the fans in support and expectation of another Spartans victory.

By the half-time whistle, Spartans had a two-goal lead, a deserved reward for some entertaining and effective football in the first 45 minutes. The support made its way from their seats to the shelter of the Café upstairs, tucking into the traditional half time snacks on offer. Conversation was, as you would expect, focused on the game and it’s clear from the passion in the voices of the Spartans faithful that the club means a great deal to them.

When the game resumed Spartans continued their dominance on the field and added to their two-goal tally shortly after the restart. As the game ended the fans rose to their feet and applauded a comfortable 3-0 win.

Instead of making a quick get away to their cars or beginning the walk home, a section of the support stayed behind and go up to the café once more. There they discussed the game as well as a future Scottish Cup tie with East Stirlingshire from the Third Division.

Spartans have made the move from the now derelict City Park, into purpose-built Ainslie Park but this is not simply a football team, but a great community football club.

The Spartans Community Football Academy commits to supporting and delivering a range of community projects including the Adult Literacy Programmes in association with Heart of Midlothian Community and Education Trust, HBOS and the City of Edinburgh Council. It is this community spirit which is the driving force behind the club and the secret to its success.

The Scottish Cup upsets apart, Spartans’ other claim to fame is having more registered players than almost any other club in Scotland. It has a huge and successful youth system and since season 2008/09, Spartans has had a ladies team in the Scottish Women’s Premier League since amalgamating with Edinburgh Ladies F.C. Spartans is an incredible club and with its facilities and community work, we believe they ought to be in the Scottish Football League.

We thoroughly enjoyed our visit to Ainslie Park and would certainly welcome a return trip.

*by Alan Clark and Joseph Brady