What Has Gone Wrong at Liverpool?

2011 and the arrival of Kenny Dalglish to the helm at Anfield was supposed to have led Liverpool out of the storm and towards the golden skies that the club had been so used to until just a couple of seasons ago. However, this has not been the case up to now. Dalglish has, of course, steadied the ship and cleared out some of the sub-standard players such as Christian Poulsen and Joe Cole but Liverpool’s results have not improved as the fans, the manager and the board would have hoped. I’m not suggesting that Kenny Dalglish is not the right man for the job, rather the job is a much bigger one than Kenny or anyone else expected. 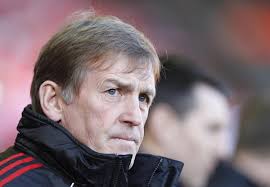 The club’s transfer policy of paying extortionate prices for young British talent has backfired to date and that cannot be disputed. Andy Carroll is going to have to work very, very hard to justify the £35m price tag that Liverpool placed on him a year ago this month. Carroll’s transfer appears to have been nothing more than a panic buy in the wake of Fernando Torres’ impending departure. That, or a transfer scouted via Carroll’s performances on Match of the Day in the first half of last season where he looked quite threatening once or twice but did that warrant him becoming the eighth most expensive footballer of all time at the time of his transfer? No. Jordan Henderson is another slightly disappointing buy and Dirk Kuyt can feel fairly aggrieved that Henderson has taken his place on the teamsheet several times this season, despite Kuyt’s poor scoring record. Henderson, who cost Liverpool 16m in the summer, has yet to show any real spark and has disappointed on more than one occasion in a red shirt. Charlie Adam has been hit and miss all season long and has been poor on several occasions. Sent off against Tottenham, missed a penalty at Wigan and scored an own goal in the disastrous home draw with Blackburn, it could be argued that Adam has cost Liverpool at least 7 points this season, whether he has been unfortunate or not. However, Carroll is only just 23, Henderson is 21 and therefore, both may well prove their worth to the club in the coming years. Stewart Downing has had little impact for the Reds and his only goal came in the FA Cup at home to Oldham. The irony for Kenny Dalglish is his cheapest signing, Craig Bellamy, has been arguably Liverpool’s best player this season with outstanding performances at Chelsea in the league and Carling Cup along with vital goals at home to Newcastle United and Norwich City. Dalglish has said that he is looking at the long-term and I, like other Liverpool fans, accept that and wish him every success but I have to question whether the likes of Carroll, Henderson and Adam are the players to take the club back to the Champions League and the top of the Premier League, especially with Manchester City and Tottenham Hotspur improving year on year.

The next main issue for Liverpool is their home form. Liverpool have pulled off some outstanding away wins notably at Arsenal for the first time since 2000 and at Stamford Bridge thanks to a late wondergoal from Glen Johnson. But, at Anfield, Liverpool have been poor. Home draws with Norwich, Swansea, Blackburn, Sunderland and Stoke City have cost Liverpool dearly, the extra 10 points that would have been expected from those games would see Liverpool sitting in 4th place, a point behind Spurs, but more importantly, 4 ahead of Chelsea and 9 ahead of Arsenal. These 5 home draws may be the difference between Champions League football against Barcelona or Real Madrid or Thursday nights on channel 5 against Bate Borisov or Red Bull Salzburg. You can obviously delve further into the aforementioned games and say how unlucky Liverpool were with John Ruddy, Mark Bunn and Michel Vorm all having the game of their lives at Anfield and Liverpool were denied by the wordwork against Sunderland and had penalty appeals turned down against Stoke but at the end of the season, who cares? 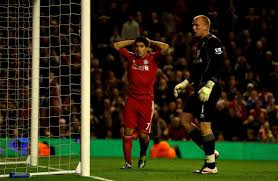 The next and potentially most costly of Liverpool’s problems is they do not have a goalscorer or get enough goals from midfield. Blackburn Rovers and Bolton Wanderers have scored more than Liverpool’s 25 league goals this season and only 2 Liverpool players have more than 2 league goals this season (Bellamy and Suarez both have 5). Luis Suarez is a superb player but a liability. His disciplinary record is poor, racial abuse and hand gestures at opposing fans have earned him a total of 9 matches suspended this season which has cost Liverpool dearly up to now. However good he may be, it is useless if he is suspended. Carroll has scored 2 in the league and Dirk Kuyt hasn’t scored a Premier League goal since April 2011. The club lacks a Fernando Torres or a Michael Owen or a Robbie Fowler and that is the biggest obstacle to Liverpool’s chances of success this season.The saving grace for Liverpool’s season up to now has been their defence. Defeats at the Etihad, the Reebok and White Hart Lane aside, Liverpool have conceded 11 goals and Jose Enrique, Daniel Agger and Martin Skrtel have all been solid infront of Pepe Reina who has made a couple of uncharacteristic mistakes at Fulham and Manchester City. Liverpool now need to turn defence into attack and build upon their excellent defensive record. 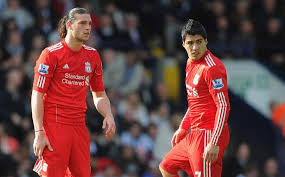 Kenny Dalglish may well be building a squad capable of competing in the Premier League for years to come and as a Liverpool fan, he has my full support as manager but unfortunately, I think his transfer dealings have not been as astute as they could have been. It is too late to dwell on who should’ve been signed, the likes of Demba Ba, because not many would’ve foreseen his start to the season, it is time to start looking for some experienced Premier League players to nurture the young players like Henderson, Spearing, Carroll and Shelvey who Dalglish seems to value. Liverpool cannot afford to slip any further behind the likes of Spurs and City if they are to stand any chance of regaining a Champions League spot in the coming seasons. However, it is not all bad, Liverpool fans can be optimistic, they have had a reasonably average start to the season but a top-four spot is still within their grasp and Luis Suarez and Steven Gerrard will get the chance to really combine after the Uruguayan’s eight-match ban comes to an end. Liverpool are without a doubt football’s biggest sleeping giant and I would not bet against the club’s biggest legend, Kenny Dalglish, being the man to wake them up.

Premiership weekend review, all movement in the relegation battle, the top seven stays the same & the Manchester clubs stay on track
Blake’s Seven – Why Wenger Should Step Down from Arsenal & more…