100 years ago, on the 1st of September, over 20 000 people watched Tottenham Hotspur defeat Wolves 3-0 in Tottenham’s first ever league game.

It took Tottenham just 6 minutes to score their first ever league goal, Vivian Woodward’s goal going straight into the record books. Woodward then struck again, 2-0 and the first brace ever scored by a Tottenham player. Tom Morris then brought the game to a conclusion by scoring a 30 yard screamer, not a bad day at the office for the new football league club.

This got me thinking and I thought about the 10 best league games in our 100 year history. Only league games count, so no European cup finals or Carling cup wins.

What a game! Tottenham went one-nil down to Didier Drogba’s second minute opener. Woody got us back on level terms before Essien scored a second Chelsea goal in the 19th minute. Berba equalised after half-time but Joe Cole once again put Chelsea in front. Tom Huddlestone got us back in it again in the 74th minute; alas, Joe Cole’s second just 5 minutes later looked to have won it for Chelsea. But Robbie Keane was on hand to save the day with an 87th minute goal. Phew! 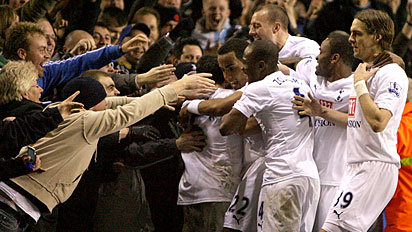 This was Tottenham’s fourth league game. Spurs were playing at home and secured a historic win thanks to goals from Minter and Middlemiss. Bolton were the hot favourites for the title, they were given a bit of a shock here! This game really made people sit up and take Spurs seriously. Bolton eventually won the league, but Spurs gained promotion by finishing in second place, a point behind Bolton and ahead of West Brom on goal average.

The 1950/1951 season was the first season in which Tottenham won the Division 1 championship. A hat-trick for striker Duquemin was the highlight of this game, 45 453 people turned up to watch the Spurs go marching on.

A great result for Tottenham in which new signing Dimitar Berbatov continued his good scoring run. This was one of the biggest London derby win’s for Tottenham ever.

What a game, what a player. Really this scoreline should have read PETERS-4 UNITED-1. Martin Peters was on spectacular form, scoring 4 against United at Old Trafford. 52 497 people went to watch the match, 52 497 people came away in shock.

This game comes in at number 5 because of the build up. Spurs weren’t on a very good run, they had been beatan at West Ham just a week earlier. Liverpool were supremaly confident and thought they had 3 points in the bag. Not quite. Ruel Fox scored first before Liverpools beloved scouser Jamie Carragher lost the match for them with an own goal. Ha Ha Ha.

A 10 goal bonaza! Berbatov carried on with his amazong scoring run, finding the net on 4 occasions. Malbranque and Defoe also chipped in with goals to seal the 3 points. This match was even sweeter since it followed a 5-1 drubbing of Fulham.

It’s always nice to beat the old enemy so imagine the delight of Tottenham fans up and down the country when we stuffed them 5-0 at home. Fan’s favourite Hughton got a brace along with Falco. Brazil also found the net to ensure that the tottenham celebrations went on long into the night…

Just over 70 000 people crammed into White Hart Lane to see this incredible match. Tottenham played fast and with flair, and 7 goals flew past the Newcastle keeper. It’s not often the Toon get beaten by more than 3 goals, so imagine their surprise when super Tottenham smashed 7 passed them!

So many great league games, only one winner. My best Tottenham league game of all time is….

The best league game of all time as this was the game where Spurs secured the league title. This was also the year when Spurs went on to win the FA Cup, meaning Spurs became the first team ever to do the double! The game reached a nervy end, with Spurs clinging on for dear life but it matterd not, SPURS WERE THE CHAMPIONS!!!!