With the transfer window closing at midnight, tonight, we can expect a busy day of transfers at White Hart Lane. Two transfers have already come to fruitian today.

As Footyjouno93 recently reported, Spurs have completed the signing of Luka Modric’s compatriat, Vedran Corluka. The 22-year-old joins from Manchester City after just one year at Eastlands. On the move, Corluka said: “I am delighted to be here because I am coming to a big club with great players, great ambition and also my best friend [Luka Modric] is here so it is a very happy day for me.” The deal will cost Tottenham £8.5 million.

On top of that, Roman Pavlyuchenko’s move to the Lane has been completed today, even though the striker is way with the Russian national squad. Expect more deals to be completed before the closure of the transfer window. Hold on tight Spurs fans. 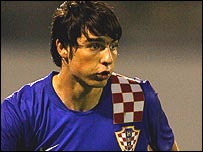 With the backing of new Arab investers, Manchester City have tabled a £30m bid for Manchester United’s main target, Dimitar Berbatov. But Spurs fans find themselves asking “Why would he leave for City? What more can they offer him?”