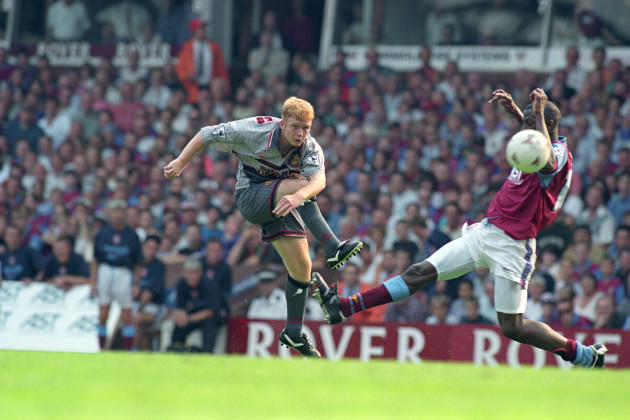 The 2021/22 Premier League season is underway, and we have already seen a huge upset on the opening day.

Newly-promoted Brentford celebrated their return to the top flight of English football after 74 years in spectacular fashion as they beat Arsenal 2-0 at the Brentford Community Stadium.

Vibrant and skilful, Thomas Frank’s side took the lead in the 22nd minute through Sergi Canos before Christian Norgaard doubled the lead with 17 minutes left on the clock.

While this was a big ‘upset’ given the sizes, financial strengths and ambitions of the two clubs involved, where does it rank in the all-time list?

Let’s kick off with another opening day Premier League defeat for Arsenal.

Played at the Emirates Stadium, Arsenal’s began the 2015/16 season with a home defeat as West Ham United registered their first Premier League win in their first game under new manager Slaven Bilic.

In the second half, Mauro Zarate produced a finish from 20 yards out to seal a memorable 2-0 win.

With 62% of the possession, Arsenal were the more dominating side on the pitch, but the Gunners only put six out of 22 shots on target.

The closest they came to scoring was when Aaron Ramsey’s effort hit the woodwork in the first half.

New manager Louis van Gaal’s first competitive game as manager of Manchester United ended in a historic home defeat at Old Trafford on the opening day of the 2014/15 season.

This was United’s first home defeat on the opening day of a new league season since 1972.

With fans struggling to brush off the ghost of David Moyes and a 7th place finish in the previous season, Van Gaal made several signings in the summer transfer window, but only Ander Herrera started the match.

Injuries at the back meant debuts were handed out to two United academy products Jesse Lingard who started at wing-back, and Tyler Blackett in a three-man defence.

Ki Sung-yeung opened the scoring for the Swans in the 28th minute. Shortly after the break, United skipper Wayne Rooney brought the scores level with an acrobatic effort.

However, with 18 minutes left on the clock, Gylfi Sigurdsson put Swansea ahead against the run of play.

Both West Bromwich Albion and Liverpool went into the 2012/13 season with new managers at their respective helms.

For Reds manager Brendan Rodgers, the opening game of the season was a nightmare.

Baggies manager Steve Clarke’s life at The Hawthorns could not have started better as he engineered an emphatic 3-0 win over the Reds.

Zoltan Gera gave Albion the lead with a spectacular strike just before half-time. Striker Shane Long had the opportunity to double his team’s lead but wasted his chance with a weak penalty after being brought down inside the box by Liverpool defender Daniel Agger who received a red card for his offence.

Long was fouled again inside the box – this time by Agger’s defensive partner Martin Skrtel. Up stepped Peter Odemwingie, who made no mistake to make the score 2-0.

West Brom added a third when a young Romelu Lukaku, on loan from Chelsea, headed home from close range in the 77th minute.

With cardboard fans gracing some sections of the Highbury Stadium to hide repair work, Arsenal took a 2-0 lead in the first half courtesy of goals from Steve Bould and Kevin Campbell.

The second half saw Arsenal’s rock-solid defence consisting of Bould, Tony Adams, Lee Dixon and Nigel Winterburn turn into cardboard themselves as Norwich engineered a stunning comeback and put four goals past them.

At the end of the season, Norwich finished fourth on the table while Arsenal were 10th, sandwiched between mid-table sides Manchester City and Chelsea.

Manchester United failed to win the Premier League three years in a row when they lost the title to Blackburn Rovers by just one point in the previous season.

For their opening game of the season against Aston Villa at Villa Park, Ferguson was without some of the biggest names in his squad including Eric Cantona, Steve Bruce, Andy Cole and Ryan Giggs.

Ferguson was forced to play a back five that consisted of four full-backs including Gary and Phil Neville. Nicky Butt and Paul Scholes started in the middle while a talented David Beckham was on the bench.

As expected, Villa took a 3-0 lead at half-time with the United youngsters failing to cope with the rigours of top-flight football.

Beckham came off the bench and grabbed a consolation goal in the 84th minute, but it was too little too late.

The defeat prompted former Liverpool defender and football pundit Alan Hansen to utter the now-immortal words “you can’t win anything with kids”.

United won the league that season by four points.

Five things to watch across Europe in the 2021/22 season
Morning Mix: Time running out for Arteta, Chelsea don’t need Kounde