Algeria in an unexpected position ahead of Mali clash

Algeria, tipped as possible favourites for the competition, find themselves in a position they would not have wanted to be in after Matchday 1 as they take on Mali in the Angola capital Luanda knowing only a win will do.

After a poor performance against Malawi, Algeria will need to perform much much better than what they did in the 3-0 defeat which left the Desert Foxes rooted at the bottom of Group A. Manager Rabah Saadane could make a number of changes to the side that stated against Malawi. Saadane will need to make a huge decision in whether to continue with Faouzi Chaouchi in goal after a dismal performance that left his manager fuming. Hameur Bouazza is also in contention for a starting place after doing relatively well in his cameo appearance. 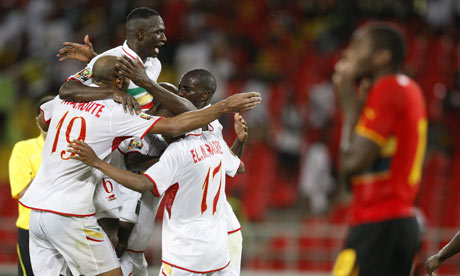 Mali produce an amazing fightback, up there with the famous Istanbul comeback

Opponents Mali were involved in a dramatic match on the opening evening of the competition, coming from behind to draw 4-4 with hosts Angola. The hosts were 4-0 ahead with 11 minutes remaining in the match when goals from Kanoute, Yatabare and two from Seydou Keita was enough to snatch a draw from a match they really shouldn’t have got anything from. It was a match that provided some excellent viewing and set the tone for what should be an eventful competition, if it can’t get anymore eventful with what has happened over the last few days. With top class players such as Kanoute, Diarra and Keita in their ranks, Mali are outsiders to succeed in the competition but Algeria will need to step up to the plate and produce a huge performance.

A defeat wouldn’t be acceptable for Saadane who has witnessed his side qualify for the World Cup and the Algerian boss expects much better in Matchday 2. After insisting the tournament should go ahead after the tragic Togo killings, rumours are strongly evolving that Saadane will resign after the tournament due to a “bust-up” with some un-named players.