Rafik Halliche’s headed goal was enough for Algeria to see off Mali in a crucial must-win Group A encounter. 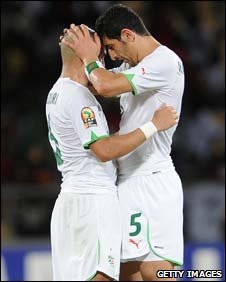 A Huge Win For Algeria

After the 3-0 loss to Malawi, Algeria needed a spirited performance against a Mali side who had plenty of quality in their ranks including Frederic Kanuote, Mahmadou Diarra and Seydou Keita. Mali had some decent spells in the game and should have capatilised on their territorial advantage. Kanoute, started on the bench surprisingly for Mali however there is no doubt he has to play on Monday against Malawi as Mali find themselves in a must-win position.

Rabah Saadane’s side created the first oppertunity of the game and came very close to opening the scoring when Marseille’s little playmaker Karim Ziani had a shot from inside the area that hit the crossbar. Ziani was proving to be a huge threat and had a shot from outside the area saved by the Malian goalkeeper Soumbeyla Diakhate.

The Desert Foxes got the opening goal just before half-time when Bezzaz was brought down which gave Ziani the opperunity to supply some ammunition for the Algerian attack. Ziani’s cross was pin-point and Rafik Halliche got his head on the ball to steer it into the net. Algeria then began to be more cautious as this was a huge game for Saadane’s men and Mali just didn’t have the class to open up the tight defence. Saadane, who has been the centre of rumours that he may leave his post as manager after the Nations Cup, was delighted with his side’s result today and said  “This win has given the perfect answer to all our critics, I did my calculations before, six points should be enough to qualify. I didn’t put any pressure on my team, I told them to go out and enjoy themselves.”

“Now we have three days to recover before our final first round game.”

Algeria now sit third in Group A ahead of tomorrow’s crunch match with the hosts Angola. A win for Rabah Saadane’s side will be enough to seal qualification to the final stages of the competition. Mali are bottom of the group with just the single point and will need to beat Malawi while hoping that Algeria lose for them to qualify.