After a gruelling qualification campaign, Argentina have been handed a relatively comfortable group at the 2010 World Cup. Diego Maradona’s side shouldn’t fear the Greeks, Nigerians or Koreans with their vast resources. The only stumbling block could be if Maradona’s eccentric squad selections continue which is entirely possible.

If the Argies do manage to qualify in the expected top spot, their knock out draw is fairly kind if the seeded nations progress as expected. A probable 2nd round draw against either South Africa, Uruguay or Mexico would see Argentina as the favourites. In particular, a match against Uruguay would be memorable as the two are bitter rivals although they would be the biggest threat to a place in the last eight. The quarter finals would see Maradona’s management credentials tested to the limit with a likely battle against the Germans who always tend to sneak through to the latter stages of the major tournaments. Whether Argentina can progress any further with Maradona as manager remains to be seen.

Maradona’s squad selection over the past qualification campaign has been so unpredictable that it would be foolish to try and predict his 23 man squad for the World Cup in June. However, here is a shortlist of players that are in with a chance of making the plane to South Africa. I have bolded the people that I think will most probably be chosen. 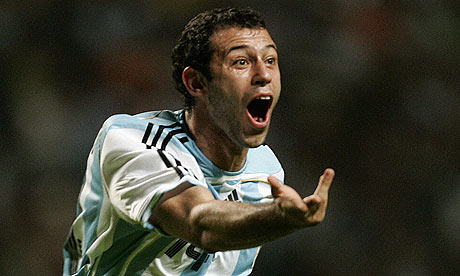 With a vast array of talent at their disposal, Argentina should be capable of going all the way in South Africa. However, weaknesses amongst the coaching staff and problems in getting the best out of star player Lionel Messi will probably see them progress no further than the quarter finals.