Why Arsene Wenger needs to bite the bullet with Arsenal

So Arsenal have gone six years without a trophy…

The Gunners had only won six in the previous 17 seasons before the leather-faced Frenchman’s arrival, why then are the Emirates faithful getting their knickers in such a twist that they are not able to be untangled?

Wenger is the same man who brought Arsenal unrivalled success in the mid-noughties; masterminding the team of ‘Invincibles’, wrestling the Premiership stranglehold from Manchester United and was within a whisker of delivering European Club football’s biggest prize to North London.

Surely it’s only a matter of time before it all comes good again for the Frenchman and his team, right?

Wrong. Such is Wenger’s ignorance he will not succumb to the reality that this Arsenal team are not good enough to win a second rate domestic trophy, never mind compete in the latter stages of the Champions League.

I originally began this article after Arsenal threw away the Carling Cup final to now Championship side Birmingham, but in all honesty I was too infuriated with Arsene Wenger to finish it off, just like his Arsenal team had failed to do against Birmingham.

Having had time to review the situation however my opinion remains the same – even if my feelings of anger towards Wenger aren’t as vivid.

One thing I want to make clear here is that I do admire Wenger’s vision; unearthing the most talented youngsters from across the globe through an extensive scouting network and moulding them, the Arsenal way, into a team capable of producing attractive and entertaining football, delivering domestic and European trophies into the next decade. Sound’s great doesn’t it?

I am resisting the temptation to profile and analyse the whole Arsenal team but I think the weakness is clear for everyone to see and that the issues lie in defence. This area of the field is instrumental in Arsenal’s lack of success in the last six years.

It will be no surprise to you that the first area to highlight is that of the goalkeeping position at the Emirates. I have no doubt that Wojciech Szczesny has all the attributes to one day develop into a top goalkeeper, but one day is not today and for that reason he should not be number one in a team chasing four trophies this season. This should’ve become clear to Wenger long before the farcical goal Obafemi Martins scored at Wembley in February.

It still beggars belief that Wenger’s stubborn approach to his transfer policy was upheld when the Arsenal board made funds available for the purchase of experienced keeper, Mark Schwarzer last summer. Schwarzer himself paved the way for the move by handing in a transfer request but Arsene Wenger refused to fork out more than £2m for the veteran Aussie stopper. An action so stubborn that even Colonel Gaddafi raised an eyebrow at.

I genuinely believe that Wenger was hopeful of obtaining Schwarzer on a free this summer and was confident that Szczesny would suffice until then, saving a mere £2m.

The decision then to bring Jens Lehmann back to the Emirates on a free transfer and out of retirement epitomises Wenger’s lack of desire to part with any cash that will make an immediate impact into the first team.

Correct me if I’m wrong, but I think that Arsenal fans would be happier £2m in the red, with a Carling Cup trophy this season. A hypothetical argument, for which I make no excuses.

The situation gets no better when evaluating the Arsenal backline. Laurent Koscienly was plucked from French Ligue 2 and slotted straight in an centre-half by Wenger, who seemed not to bother at the hugely inflated fee of £8.45m, because Koscienly is two of Arsene Wenger’s favourite three things in life; young and French. (The other of course, being his beloved ‘bomber’ jacket), which is not only hideous but also not the most appropriate item of clothing to be found wearing in London these days.

Wenger also chose to draft in Sebastien Squillaci to partner Koscienly, a bomb scare in his own right:

“Sebastien is quick and hugely experienced with an aggressive edge to his game,

His signing will give us some variation at the back as we look to fight for silverware this year.” Wenger stated, back in August of last year. Neither Frenchman however has covered themselves in glory over this transfer.

Koscienly (or ‘Obscenely’ as my spell-check aptly wants to replace him with) may benefit from the return from injury of Thomas Vermaelen, the Belgian, who has impressed in his intermittent career for Arsenal so far.

It has been said so many times before however that it’s almost become a cliché, but Arsenal need to invest in; a top class, reliable goalkeeper and a tough tackling, influential midfielder that can be the difference between a 4-0 win and a 4-4 draw! Only then will they effectively challenge for the trophies they so desperately crave.

It is not my job to say who these players may be, but shelling out £2m for Mark Schwarzer would’ve been a good start in my eyes.

I read yesterday that the Gunners are taking a close look at Joey Barton to bolster their midfield with a bit of much needed drive and fight. He may not be the perfect gentleman but he could be just the man to gently swing the Premier League pendulum back into Arsene and Arsenal’s favour.

Whatever happens this summer, I firmly believe that until either Wenger bites the bullet on his own transfer policy or the Arsenal board give him the bullet as manager of the club, the Gunners will not end that six year trophy drought anytime soon. 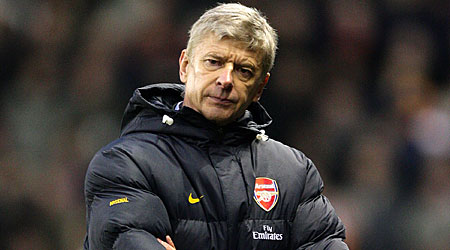 Portsmouth FC – Is the future a little brighter for Pompey?
Birmingham to Aston Villa: McCleish Saga Shows Ugly Side of Fandom