Barcelona proves they are still the team to beat

Questions were raised about the superiority of their reign and it seems the fairy tale has ended with the departure of Pep Guardiola. Barcelona, though, proves they are still one of the best teams in Europe by beating AC Milan at home and retains their chance to revenge against Real Madrid in Champions League.

With a clear target in mind, Barcelona showed up from the very first minute and played with purpose rather than trying to record 500 passes more than their opponents. It should not be a surprise to AC Milan, but Barca players’ hunger and the jeering in Camp Nou did not make life easy for the Italians, especially Ignazio Abate, whose clumsy tackle on Pedro and powerless back-pass nearly led to a suicidal ending only a quarter of an hour into the match.

What might have also unsettled the Italian right back was his unexpected opponent in the match. While David Villa usually plays on the left when starting with Messi and Pedro, it was actually the more speedy Pedro wandering around the left flank. Nevertheless, it was the decision, either Roura’s or Vilanova’s, to put Villa back in the central striker position which had shaken Milan’s defence. 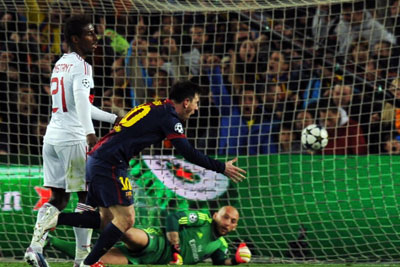 Messi celebrating his second goal of the night

Clearly still not at his best after recovering from injury, David Villa did not create a single constructive touch in the first half, but he was the behind-the-scene hero for Barca’s comeback. His presence between Christian Zapata and Philippe Mexes diluted Milan’s attention on Messi. With Xavi also back in the lineup to orchestrate the midfield, Massimo Ambrosini and Mathieu Flamini were kept busy enough that allowed the Argentine to find lots of spaces in the hole. By the time the Rossoneri took a sigh of relief at half time, Messi already managed to score a brace to reset the tie. The decision to give up their “false no.9” tactics paid off.

Gabriel Marcotti got the point spot on — clean sheet was definitely the vital factor for Barcelona to qualify. Regardless of the fitness of captain Carles Puyol, Javier Mascherano was indeed the better choice of central defender on the night. Having to play a high defence line and at the same time being conscious of counter attacks, which had cost them dearly in both El Clasicos last week, Mascherano’s younger legs and sense of positioning as a defensive midfielder appeared to fit perfectly to the game plan.

The absence of the in-form Giampaolo Pazzini apparently did Barcelona a huge favour, but it was his substitute, M’baye Niang, came the closest to deny Barcelona. Starting Flamini, Ambrosini, Kevin Boateng and Riccardo Montolivo in midfield, counter attacks were the sole attacking weapon in their pockets. Niang managed to break through Barca defence for once and got the best chance of the night. The youngster kept his nerve and fired past Victor Valdes, but the post chose to be the enemy rather than the ally this time. 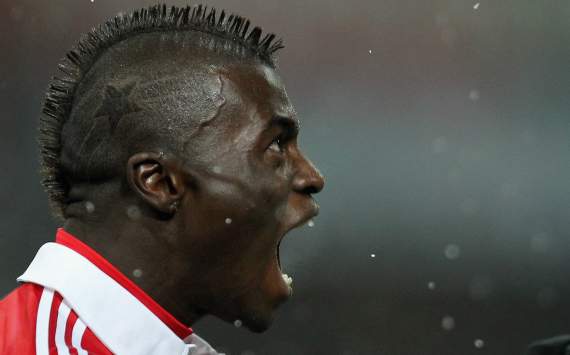 Niang and Milan were frustrated by the lack of luck

The potential equaliser would mean Barca needed three more goals to advance. Instead, Messi did not wait long after Niang’s miss to make it 2-0 and levelled the aggregate score. Sometimes, an inch or even a centimetre could mean a lot in football.

It was only a matter of time when the winning goal came. Massimiliano Allegri sent Robinho, Sulley Muntari and Bojan Krkic for the last attempt to regain the upper hand. Bojan and Robinho created an invaluable chance to score an away goal, but Jordi Alba stood in their ways to ensure it was a zero in Milan’s scoreline. David Villa and Jordi Alba celebrated their goals emotionally on both sides of Robinho’s chance and Barcelona got the last laugh with a convincing 4-0 victory.

On the brink of elimination, Barcelona showed the desire and determination that once made them invincible. Dignity and reputation were restored at Camp Nou. AC Milan may feel they have thrown away an useful lead. Nonetheless, one would agree there are only a handful of teams in Europe that are capable to fend off the Catalans this night.