Starting the LaLiga on a high, things were going smoothly for Barcelona and thats when our STAR Player Lionel Messi made a statement: “We are going for an all-conquer campaign and will settle for nothing less.” After the last week Milan upset and Madrid humiliation, that situation doesnt seem to be in the balance anymore. So what went Wrong? 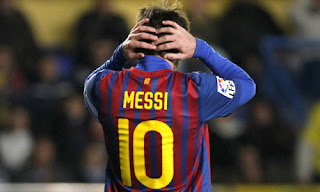 Ofcourse, with Pep Guardiola departed and Vilanova in NewYork for the treatement, Barca is missing the presence of these leaders who have led this project since the rise of Barcelona to the throne in 2008 and meanwhile in their absence, Jordi Roura doesnt seem to be the MAN we need. He has failed tactically in almost every field. Earlier when Alves used to advance forward, Abidal was there incase of any breach but in the present formation, both Alves and Alba seem to be in advanced position more often than they should be leaving all the defending to be done by Pique and Puyol who have just recovered from their injuries. Puyol who is leading with full commitment finds Age, a factor which is not on his side a he is losing his magic in the mid-30’s which was evident when Di-Maria played him for the 2nd goal on Wednesday night.

Secondly, Where was David Villa? All the speculations of a winter exit for Villa were called off but what does this Spain International need to do to get a place in the STARTING LINE-UP? After starting against Sevilla and scoring too, the crowd hailed and hoped for Villa to start in the Clasico but Mr. Roura went with Fabregas & Pedro. Messi was isolated and fabregas looked lost. Also, Roura has failed tactically to organize the defence with both Pique and Alba caught out of position in the Madrid match.
Coming to the playmaker XAVI, who was missing in the Madrid match; Oh wait ! He was playing but just wasn’t visible enough. Well thanks to the pressing by Real Madrid players, the match recorded least possession by Xavi in the season. Iniesta on the other hand looked uncomfortable playing in an extreme forward position. He needs to be back where he’s the best and that is alongside Xavi (Keep that in Mind Mr. Roura).

Barca’s defence has strugged in the recent times which is evident to the fact that they conceaded 11 goals in consecutive matches before the Clasico and both Milan & Madrid used the same tactics to frustrate the Catalans: Defend deep and Counterattack ! So what does it mean? Is the Barcelona play of style broken ? Is the reign over?
The answer is not yet. Most teams have tried adapting this strategy but Barcelona have got past with relative ease. Madrid and Milan have done it effectively and it is true that this season; Against the bigger teams, Barcelona appear to have forgotten how to do what they normally do with their eyes closed. They need some of the magic back quickly, because if not, what promised to be an all-conquering campaign will merely finish with LA LIGA !

FCBarcelona: What Went Wrong ?
Barcelona proves they are still the team to beat