Can Arsenal push for European qualification? 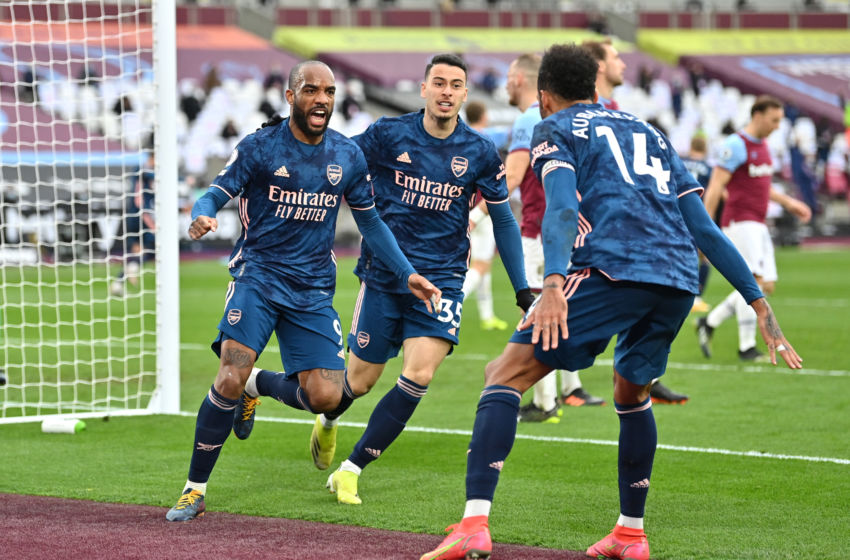 Arsenal impressively fought back from 0-3 to rescue a point at West Ham United on Sunday, and arguably deserved a penalty that could have won them the game.

The Gunners could do little about Jesse Lingard’s opener, but a lack of concentration led to West Ham’s second, and poor defending for the third. However, the fightback shows what they’re capable of in attack.

Alexandre Lacazette started the comeback with a fine first half strike and should have had a penalty in the second half. The French striker then headed home the visitors’ equaliser in the final 10 minutes.

As a result, Mikel Arteta’s side sit ninth in the Premier League table with nine games remaining, but still some six points off the final Europa League spot.

It’s been an inconsistent and so far, disappointing campaign for the Gunners, who many felt could break back into the top four this season under Pep Guardiola’s former number two. This was aided by their performance in winning the FA Cup at the end of last season.

There’s no doubt the team has had its struggles this season, which included seven defeats in 10 Premier League matches (W1, D2) leading up to Boxing Day. They have somewhat turned their season around since, but still managed to drop points at home to Crystal Palace and away to Burnley.

A top four finish this campaign is almost out of sight now, but Champions League football next season is still very much a possibility. That’s because Arsenal have drawn Slavia Prague in the quarter-finals of the Europa League, a very winnable tie on paper.

The Gunners are the bookmakers’ second favourites to win the competition at 3/1, which is much shorter than the 6/1 we found on them to finish in the top six on the Betfair football app this morning.

Victory over the Czech outfit would line up a semi-final versus either Villarreal or Dinamo Zagreb, whilst the other half of the draw includes Manchester United, AS Roma and Ajax.

Liverpool visit the Emirates Stadium over the Easter weekend, whilst a trip to Sheffield United is on the cards three days after their Europa League quarter-final first leg.

Arsenal still have to host Everton and travel to Chelsea before the season is out; two games they won’t be odds on favourites to win, if even favourites at all. Arteta simply has to throw all his eggs in the European basket and use that route into the Champions League.

This season has seen a number of young, promising players given their opportunity by the manager. Bukayo Saka has started most Premier League games, Emile Smith Rowe has forced himself into the starting lineup in recent months, whilst Gabriel and Kieran Tierney are still only 23 themselves. Yes, Arsenal are going to need a good summer transfer window if they’re to be serious challengers for the top four next season, but getting their hands on the Europa League this term would be the next step in the right direction for the young manager.

Tactical Analysis: Arsenal’s collapse against West Ham and how they regrouped to rescue a point
Arsenal Defender Kieran Tierney Out For Up To Six Weeks With Injury