Tactical Analysis: Arsenal’s collapse against West Ham and how they regrouped to rescue a point 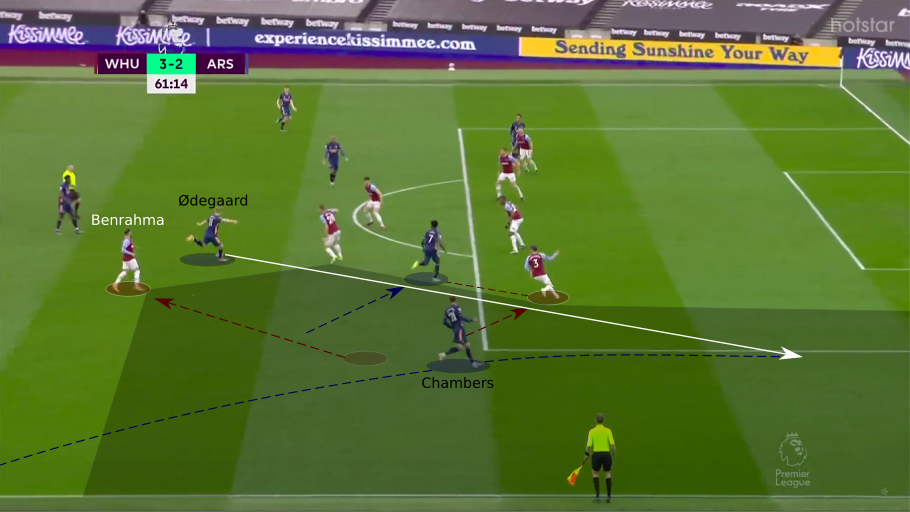 After an up-and-down week, Arsenal made the short trip to the London Stadium to face West Ham United in the Premier League. The Gunners had beaten more bitter rivals Tottenham Hotspur in their last league clash, but their midweek match in the Europa League was less positive, as they lost to Olympiacos by a goal, but they ensured progression anyway on aggregate.

West Ham, on the other hand, had been much more consistent. Since the start of February, they had only lost three matches and drawn one in all competitions, with all of their defeats coming in Manchester.

European qualification via the Premier League was looking quite difficult for Arsenal, so their main focus undoubtedly was the Europa League. West Ham, on the other hand, needed to win to keep their distance from the likes of Liverpool, Tottenham and Everton.

The Hammers got off to a brilliant start, taking a three-goal lead within 32 minutes. However, they conceded once before half-time, before shipping two more goals in the second half to let the three points slip away. In this analysis, we will take a look at how that happened, while also focusing on Arsenal’s turnaround.

West Ham were clearly the better side in the opening stages of the match. They had about 80% of possession in the first 10 minutes, and soon started translating their dominance on the scoresheet. While they were unquestionably brilliant, Arsenal were equally responsible for their initial downfall.

The Gunners defended in a 4-4-2 as the wingers dropped back while Martin Ødegaard pushed up alongside Alexandre Lacazette from the 4-2-3-1. They started off with Pierre-Emerick Aubameyang in an unfamiliar position on the right wing, while Bukayo Saka was on the left.

West Ham looked to overload the left with their attacks early on, so both Jesse Lingard and Michail Antonio drifted to the flank from their central positions. They dragged the Arsenal defence to the side with them in the process.

The Hammers targeted the left because of Aubameyang’s defensive weakness, which is exactly what they exploited for the opener.

Antonio dropped deep on the left to receive a pass from Declan Rice after Aubameyang was caught out of position as he had left space on the wing. To stop him, David Luiz had to push up from the defensive line, opening up a hole there.

Antonio played a short pass to Saïd Benrahma before darting down the channel to exploit the space vacated by Luiz, where Benrahma played a quick return pass.

The English forward then went up the flank, got into a crossing position and pulled the ball back for Lingard, who was free at the edge of the box. He did the rest with a brilliant finish into the top corner.

After taking the lead, West Ham followed up with some very good pressing to keep Arsenal hemmed in.

The Hammers stayed in their 4-2-3-1 shape while doing so. Antonio pressed the centre-back in possession, while Lingard marked the deeper-lying Arsenal holding midfielder. Tomáš Souček picked up the other, while Declan Rice took care of Ødegaard and the wingers stayed in position to close down the full-backs if they received the ball.

They added a second in no time, as some good pressing from Jarrod Bowen along with help from Lingard and Antonio forced Xhaka (who was dropping into the left-back position for Arsenal in the opening stages to free up Kieran Tierney to get forward) to play an aimless ball down the channel. It came right back, and after Antonio was brought down by Saka, a quick free-kick caught the visitors napping and allowed Bowen to make it 2-0.

West Ham’s third was also a result of their successful high press.

It started off with Lingard closing down Bernd Leno as Antonio stayed back to keep an eye on Thomas Partey. The keeper had to play a pass quickly, so he decided to chip the ball towards Tierney.

The Scottish full-back was ahead of Bowen, but he was quickly closed down by Vladimír Coufal, who came up from right-back. The Arsenal man could do little as he was surrounded, so he attempted to cushion the ball down to Aubameyang, but Rice intercepted it. West Ham then got forward on the right, and although Bowen’s cross was blocked, Coufal’s second attempt was much more successful.

After conceding the second goal, Mikel Arteta made a number of tactical tweaks. They took a while before they seriously started working (even allowing West Ham to add a third as we saw above), but once they did, they caused lots of problems.

Around the same time, West Ham stopped pressing so high, instead opting to sit back in a 4-4-1-1, with the wingers dropping alongside the midfielders.

This lack of pressing allowed Arsenal to have easy possession without the risk of getting caught while building out from the back. This should explain why they had 68.2% of the ball after going 2-0 down, and this is what allowed them to regroup.

After Xhaka was caught out for the second goal, he was no longer asked to drop into the left-back position. With this, Tierney’s advance during the build-up was also restricted, but he did stay alongside the midfield unlike Callum Chambers, who was firmly in the back line. Ødegaard dropped off the front line, so Arsenal had a sort of a 3-3-1-3 in the build-up.

In the attacking phase, both of the full-backs pushed forward now, creating a five-man front line. After Aubameyang and Saka were both partly responsible for the first and second goals respectively, they were restored to their natural positions. The two of them looked to play on the line of the defence, while Lacazette often dropped deep.

Ødegaard operated right behind this front line, using his world-beating quality to thread passes into the attackers. He was usually biased towards the right for two reasons; his left-footedness would help give him a greater passing range, but more importantly, Chambers was often free on the flank as Benrahma failed to track back.

This map shows the origin of all of Ødegaard’s forward passes targeted in the final third after the third West Ham goal. Evidently, the majority of them originated on the right, with the right half-space being used most often.

Getting into good crossing positions is one thing, but it means nothing if a good ball is not delivered into the box. Chambers is a centre-back by trade, so there was some understandable doubt about his crossing abilities, but he turned out to be absolutely brilliant in that regard.

He delivered the first-time cross to Lacazette in between the West Ham lines for Arsenal’s first after being played in by Ødegaard. The Frenchman had a swipe at it, and a deflection from Souček ensured that it hit the back of the net.

Ødegaard and Chambers combined to create Arsenal’s second as well. Once again, the Norwegian international played Chambers in on the right from the half-space. Also, notice how Saka’s run to the inside helps create more space for the advancing full-back.

Chambers delivered yet another first-time cross, this time across the face of goal. Aubameyang was all set to tap it in, but Craig Dawson decided to keep his goal-drought going and lashed it into his own net.

There were changes galore in the 74th minute. Xhaka and Saka came off for Arsenal to accommodate Emile Smith Rowe and Nicolas Pépé, while Mark Noble replaced Bowen for West Ham.

This saw the home side switch to a 4-5-1, as Noble slotted in the centre of midfield while Lingard moved out to the right.

Another set of changes five minutes later saw Gabriel Martinelli replace Aubameyang for Arsenal, while Ryan Fredricks came on in place of Benrahma for the hosts. This meant that Lingard switched to the left as Fredricks slotted in on the right of midfield.

All of these changes might have just served to further destabilise West Ham, who were made to pay just a couple of minutes later. Partey found Ødegaard’s in the right half-space through a gap between Lingard and Souček.

The Norwegian playmaker did what he does best – take the ball on the half-turn and help it on to a teammate in a dangerous area.

This time, it was Pépé, and the substitute hung up a perfect ball to the far post for Lacazette to equalise.

This was quite a match of football. West Ham were brilliant for the first half an hour, while Arsenal were unspeakably terrible. The hosts deserved the 3-0 lead thoroughly, but they can only blame themselves for what followed. They took their foot off the pedal, seemingly convinced that the three goals would be enough to take away all the points.

As aforementioned, this what allowed Arsenal to regroup, but boy did they regroup! Arteta’s tactical changes made up for his initial mistakes, while the players clearly stepped up, especially after a presumable ticking off (and much more) at half-time. Chambers flourished at right-back, as his overlapping runs and dangerous crossing created the first two goals for Arsenal, but the star of the show undoubtedly was Ødegaard. The Real Madrid loanee was brilliant throughout, as he was involved in the build-up to all three goals.

So, although Arsenal got a point out of this game, their main takeaway should be to sign the outstanding Ødegaard at all costs; for their sake, for his sake, and for all viewers’ sake.