With the newspapers’ suggesting today that Jamie Carragher could be in line for an unlikely England recall, many are asking whether this is an act of desperation by Capello or a master-stroke.

England’s defence has for so long proved to be the rock solid foundation, excluding the goalkeeper position, due to the long term partnership of Terry and Ferdinand but this has been put to the test in the last few months due to injury and off-the-field woes. Add to this the uncertain form of Matthew Upson and all of a sudden England look a little thin on the ground in the centre back department, despite the growing media overtures for the call up of Michael Dawson. 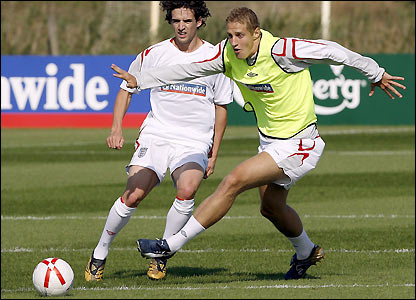 Dawson, too inexperienced for the World Cup?

The inexperienced Tottenham centre half’s time will come after this World Cup, but for now the side needs experience and one other vital ingredient, versitility. It’s widely recognised the Ledley King will be called up to the squad, and a great addition he could prove, the idea of Carrager boarding the plane to South Africa is one that may be one of Capello’s defining moments.

Liverpool’s most consistent performer this season, Jamie has quietly gone about being the solid foundation during the Anfield side’s torrid 09/10 term. Centre back, left back and right back, Jamie has performed admirably in each position, regardless of his partner. The fact that he can play anywhere along the back line will prove too tempting for Capello especially as his side are not blessed with many options at right back. Scratch below the surface of Glenn Johnson and you’ll only find the inconsistent Wes Brown or the sadly too-slow Gary Neville. Adding Carragher to the squad could also free up another position further up the side, perhaps giving Fabio the chance to take a fifth striker. Despite his claims that he’ll only take two players for each position apart from in Goal. 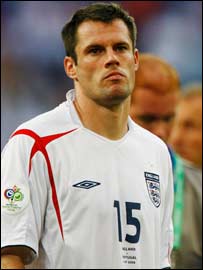 Will we see Carragher back in an England shirt at the World Cup?

Any concerns about the amount of time he’s been out of the England squad should be allayed by just reviewing the footage of him during Liverpool’s Europa League campaign where he was at ease against many of the top strikers and wingers in the world.

A call up to the England squad could prove an offer too good to turn down for the self-imposed exile, who’s surely looking forward to the potential prospect of lining up in a white shirt, having spend most of the season alongside the innept Kyrgiakos.

One thing is for sure, Fabio Capello could do much worse than to pick Jamie Carragher for the final 23 to go on the plane to South Africa. Unlike his predecessors Fabio won’t gamble, that’s why Jamie is a sure bet.