Rangers came from 2-0 down at Pittodrie to leave the Granite city with a stunning 3-2 victory this afternoon.

Nikica Jelavic netted the winner for the Champions on 67 minutes after Kenny Miller’s brace cancelled out Aberdeen’s first-half lead. However, Rangers will be sweating over the fitness of midfielder Steven Davis who was substituted with 15 minutes remaining ahead of Wednesday’s Champions League clash with Turkish
champions Bursaspor. 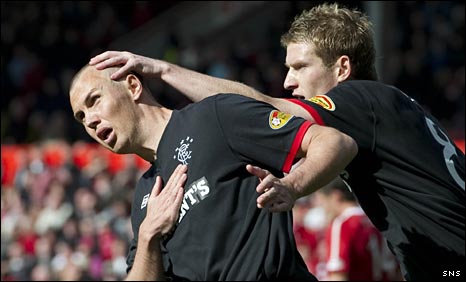 The game was quite patchy early on with referee Willie Collum blowing for every minor foul in the game. In Aberdeen’s first attack, Scott Vernon was slid through on goal as the Rangers defence stood flat-footed and the former Colchester striker finished confidently past McGregor. Rangers struggled to break open a strong Aberdeen defence and Naismith came close but dragged his effort wide of the goal.

Chris Maguire was on hand to net the second for Aberdeen when he nipped in between Bougherra and Weir to bundle the ball past McGregor from Darren Mackie’s left-foot cross. Mackie was given space by Whittaker, who suffered a head knock earlier, and put in an inch-perfect cross as neither Rangers centre-half picked up the Aberdeen goalscorer.

It took Rangers four minutes to get back into the game and Slovakian winger Vladimir Weiss produced an excellent piece of skill to weave into the penalty area before being fouled by Ifil and referee Collum pointed to the spot. After a bit of handbags between Diamond and Naismith, the in-form Kenny Miller hammered the ball down the middle to give Rangers a lifeline.

Aberdeen seemed to capitulate in the second-half as Rangers produced a much stronger performance. The Champions were ruthless infront of goal and Kenny Miller netted the equaliser as Naismith and Davis combined to give the Northern Irish midfielder acres of space inside the box and he gave Miller the easy task of firing high into the net.

Jelavic came close to putting Rangers ahead when his curling effort clipped the post. However, the Croatian International found the net on 67 minutes when Jamie Langfield’s poor clearance was mopped up by Rangers and sent Steven Naismith through on goal and he slid the ball across the box for the on-rushing Jelavic to tap into the empty net.

A fine comeback from Rangers which sends them back to the top of the Scottish Premier League.