There’s only one Stevie Naismith! 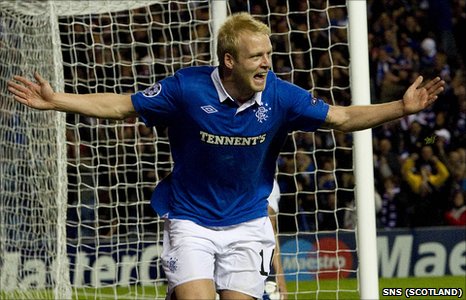 AFTER crucial victories over Bursaspor and Hearts, Rangers forward Steven Naismith has caught the eye of many.

The ex-Kilmarnock forward was signed for £1.9m from the Rugby Park club as a hot-prospect for the future. Celtic, Hearts and Hibernian all failed in bids to lure him to their prospective clubs.

Since his arrival at his boyhood heroes, his career has been filled with highs and lows. For most of his time, he has been sidelined with injuries at Ibrox, with Mo Edu saying when he joined from Toronto he always seen Steven heading to the treatment room.

Now, the 23-year-old is in the form of his life. After attracting praise for his display against Manchester United at Old Trafford, ‘Naisy’ has gone on to score crucial winning goals against Bursaspor in the Champions League and Hearts at Tynecastle. With three league goals, Naismith is doing extremely well.

It is encouraging for Rangers that Naismith is starting to live up to his potential, with Scotland boss Craig Levein now considering him as one of his key players.

Naismith knows that he has thrust himself into the thinking of the manager for every game and he puts this down to an increase in his fitness which has bettered his performances.

“I do feel much stronger and more fitter than I have done in the past. In the latter stages of games, I feel I have more energy to make runs. In the past, I’d maybe have stayed in my position and made sure I defended rather than attacked.” he told The Scottish Sun.

“In the last few weeks we’ve had to go for it in the latter stages of games. Of course, I would rather talk about my performances than my injuries. When people mention the injuries, though, it is a reminder I don’t want to go back there. When you have been down there, it makes you appreciate the good times so much more.”

The form of Naismith and Kenny Miller has been outstanding for Rangers. Miller has bagged ten SPL goals and is truely living up to the no.9 tag left by Kris Boyd. Even though Naismith was signed as a striker, he has rarely started up front. He is mainly used on either the left or right flank, but this season he has made the right midfield role is own.

With his versatility (he can play up front, left or right wing and centre midfield now), Walter Smith is bound to include Naismith in his teamsheet every week. ‘Wee Naisy’ is pivotal to Rangers’ chances of retaining the title if he plays like has been doing. 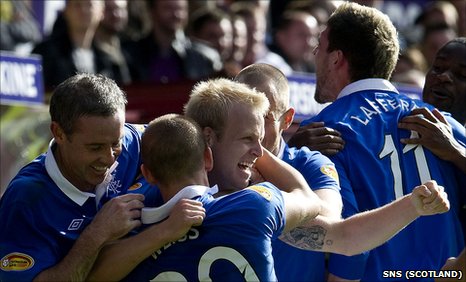 He knows exactly the kind of focus and determination that is required to bring home an SPL title, and he’s ready for the fight.

“A team does not win a championship without having an element of pride. They are not going to sit back and accept it and there was no acceptance here. I don’t think it’s just the last two results. We have also shown plenty determination over the last few seasons to make sure that we can do as well as possible.

“We have had some success and we have had some failures. The one thing that has remained constant, however, is that the team has always endeavoured to do as well as they can.”

This fighting spirit and determination, coupled with blistering scoring form, is exactly what the Rangers supporters want from their team every year.