The Demise of Dutch Football

Football is a sport with very few constants. Younger readers may be surprised to realise this, but the English Premier League wasn’t always the crème de la crème of European football.

The Eredivisie, a league that was once regarded as the helm to the greatest sides in world football between the late sixties and early seventies. Between 1969 and 1973, a Dutch side participated in every European Final, Feyenoord winning their first and only Trophy in 1970 making themselves the first Dutch side to do so, with Ajax following suit  winning the next three. Total football was born and its clear winning mentality would soon filter through all branches of Dutch football as the national side would go on to two World Cup finals in the same decade and then through the entire sport. Football was never the same, and its influence helped carve the shape of some of the worlds greatest sides( Ac Milan and Barcelona to name but two). 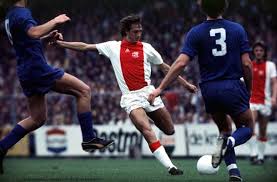 Since the Late 90’s, the Eredivisie has downgraded from one of Europe’s best, year after year and now finds itself gazing from afar at the glamour lights of Europe’s prestige Champions League.

Like so many leagues in moderately sized European countries now, the Eredivisie finds it impossible to compete with Europe’s powerhouse leagues in Germany, Italy, Spain and particularly England. In a day and age were football fans are no longer restricted to national domestic football, many in Holland consider it’s premier league, second rate and opt to watch the English Premier League or the Bundesliga on televison.

But can you blame them? If you where to mention the top sides in the world ten or twenty years ago, you would’nt go too far before Ajax or PSV where mentioned. Try mentioning them in the same breath as the worlds best now, and you’ll be laughed out the room.

For you see the key to any league’s long term success is a stronghold in Europe, and unfortunately Holland’s fortune hasn’t done them much good in the past few years.

This can be put down to the demise of the Eredivisie’s key assets. Ajax for example, havent made a dent in Europe since a surprise quarter final in 2003, aswell as a five year absence from the tournament before this year.At the time of writing they are sitting in third place in their Champions League group, with a final away match against Milan to seal Europa League football.

PSV on the other hand went three years between 2004 and 2007 reaching the last 16 of the Champions League. Unfortunately this was the end of their luck and the following year they saw themselves fall dramatically out of the 2008-09 Group stages with only a single win and five losses. This run continued throughout a hugely disappointing year, resulting in the Eidenhoven club only managing Europa League qualification for the 09-10 season.

Looking at Uefa Coefficients, the country now sits in an abysmal 9th position behind countries such as Portugal and Ukraine, playing catch up while fending off other leagues such as Turkey and Greece shows just how far things have fallen since the turn of the millenium. It’s clearly obvious, Dutch football can’t continue to accommodate its top sides failures in Europe.

Yet Dutch footballs participation in Europe is the least of the leagues problems.

In August of this year, the Dutch Football authorities announced that 13 clubs in the Dutch leagues, where under strict observation at the risk of going bankrupt and have three years to turn it around at the risk of loosing their licence.  This included strict observations on club transfers, club wages and cash flow in and out of the clubs. Of the 13 sides mentioned, 5 where from the Premier Division -Excelsior, Feyenoord, N.E.C, Roda JC, and Willem II.

Of those 5 clubs, Feyenoord have been hit the hardest. Last season they made a loss of £12million and had to get bailed out by their own fans as they raised 20 million euro’s to save the club from bankruptcy, at least till the end of the season.

Feyenoord claim to have the most loyal fans in the world

During the summer, most of the first team where released, including Roy Makaay and Denny Landzaat leaving the first teams squad in the hands of mostly U-19 squad players and trialists from the second division.

Many speculate as to why the club are in such a financial rut, some suggest its a result of ex-chairman Jorien van den Herik who was accused of countless fraud charges at his time with the club, but many consider it an unfortunate coincidence that the club just dont seem to produce the talent they once did, along side a lack of any European competition money in six years.

The golden rule for Dutch football is and always has been, the youth. In such demanding financial times for the league, most clubs have found themselves having to sell their best youngsters simply to keep their heads above water. The problem for Feyenoord is that they can’t seem to keep the production line going. With the exception of Dirk Kuyt and Salomon Kalou in 2007, the big money moves out of Rotterdam have been few and far between while big money moves for average players into Rotterdam have been far too frequent.

At the time of writing, Feyenoord ar 14th, two points from the drop and only one win in there previous five games. With the club staring relegation and unmanageable debt down the barrel of the gun, i can’t think of a more fitting example of what kind of situation this league is in.  A moment please, for a fallen giant.